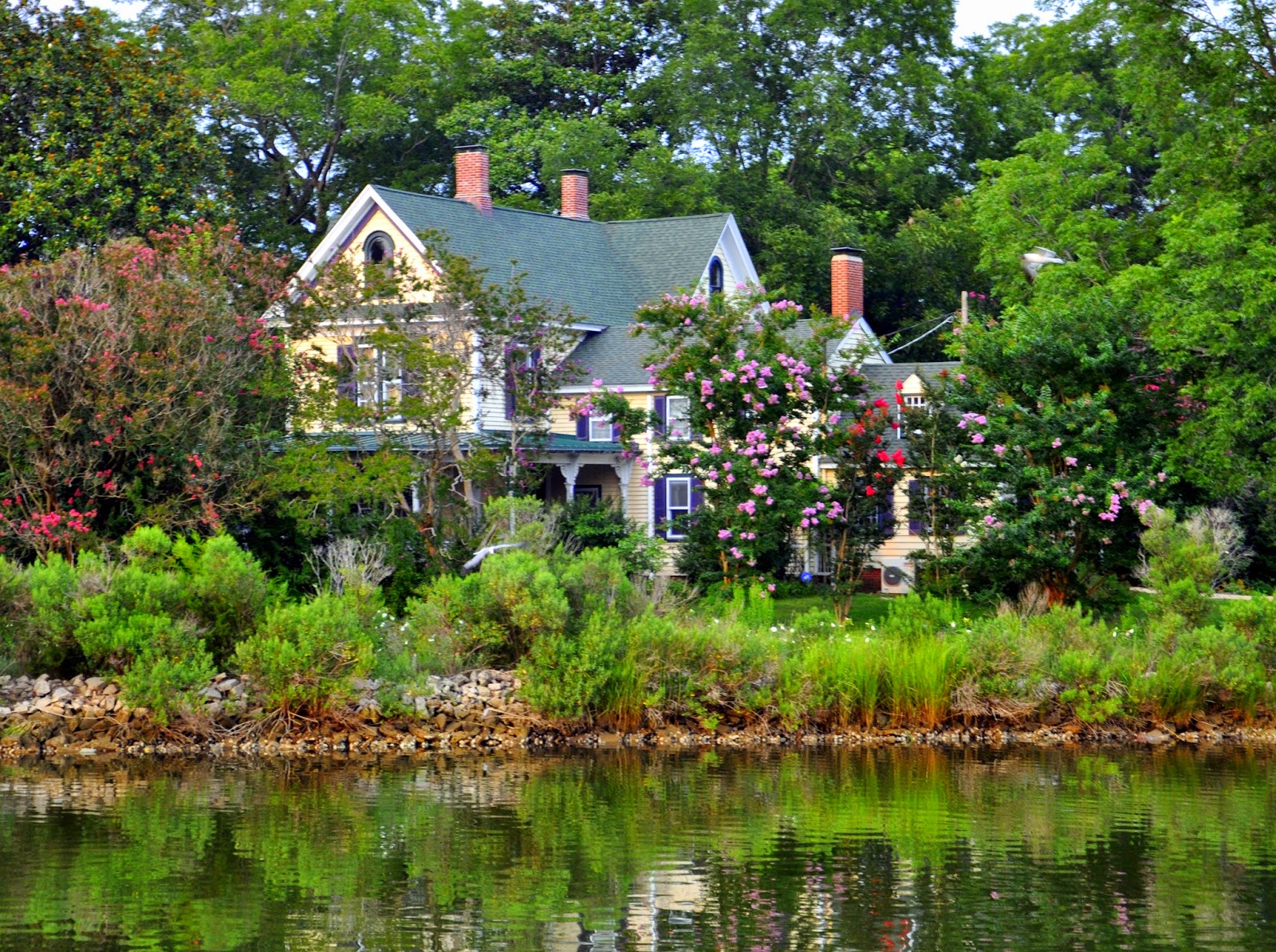 This is part two of Chesapeake Lighthouses, Southern Expedition, a two-day excursion to 11 lighthouses around the Chesapeake Bay.

From Tangier Island, we headed straight over to Onancock, VA, arriving around 5:30 p.m. We unloaded our bags, and headed up the street to our respective inns (Captain Jack arranged rides for those in the group who needed help getting to the inns). Overnight arrangements were made individually at the various bed and breakfast inns in Onancock.

Founded in 1680, Onancock is a peaceful, bayside village, with stately, Victorian homes along waterfront properties, the crepe myrtle blooms were fading, but still lovely. The name, Onancock, is derived from the Indian word "auwannaku" meaning foggy place. Along Market Street, mid-19th century homes were land bases for sea captains who sailed the bay in vessels large and small. Late 19th century houses with intricate Victorian gingerbread trim represent the flourishing steamboat era during which Onancock connected itself firmly to cosmopolitan Baltimore.


My sister and I chose the Spinning Wheel Bed and Breakfast, mostly because my sister loves spinning wheels. The room was lovely, the bed comfortable, the innkeeper pleasant to chat with and accommodating (he got up extra early and made us scones and muffins because we had to board the Sharpes Island before breakfast was officially served for the other guests). 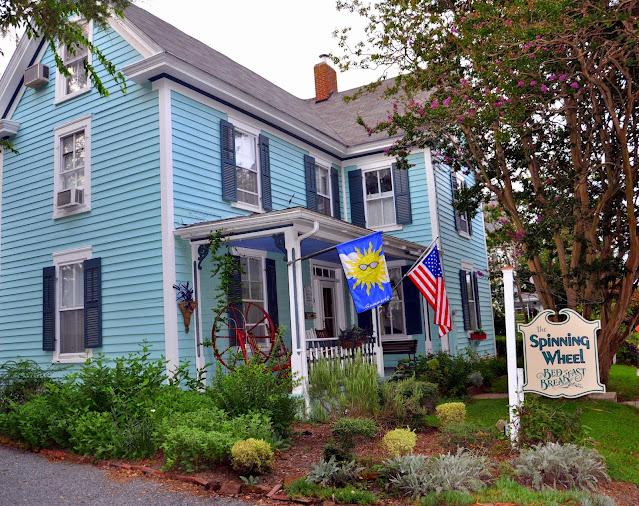 Some of the Bay's lighthouses are now simply lights mounted on the same base where the lighthouse used to be. In the 1960s, the Coast Guard dismantled several of the lights, including the Watts Island and Janes Island lighthouses. We cruised by these lights on our way to fuel up in Crisfield. 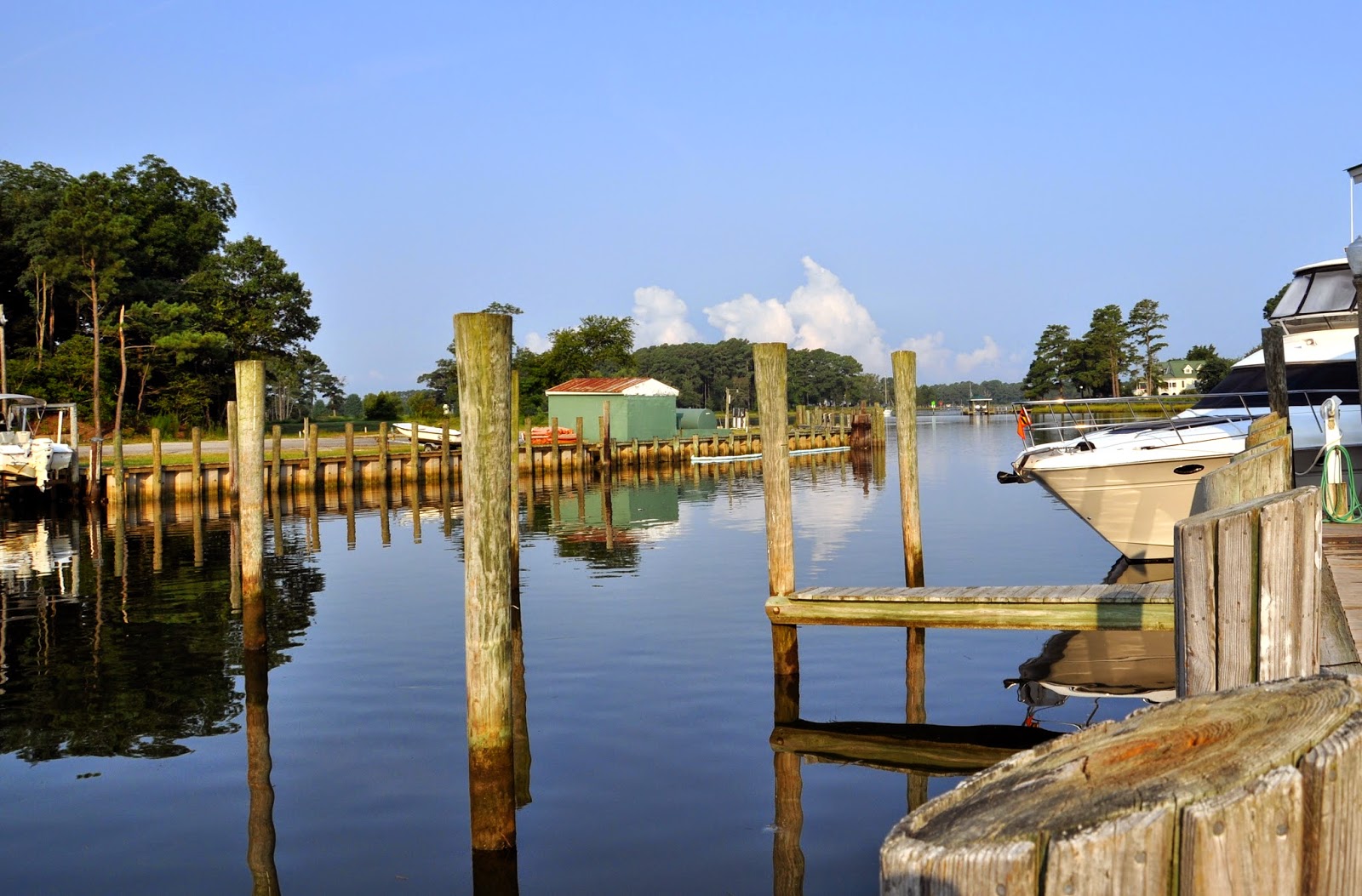 The Watts Island Light was a historic lighthouse located near Watts Island -- now one of the Bay's "disappeared islands." The island was plagued with erosion, and by 1923 four of the original 7 acres had disappeared. In that year the light was automated and the entire island, including the keeper's house, was sold to a Baltimore insurance executive, save a tiny plot centered on the tower. In 1944 a winter storm demolished both the house and the tower, and now even the island itself is gone. The spot is now charted as "Watts Island Rocks" and is marked only with a lighted buoy. The Janes Island Light was a screw-pile lighthouse located near Crisfield. Twice destroyed by ice, it was replaced in 1935 with an automated beacon. 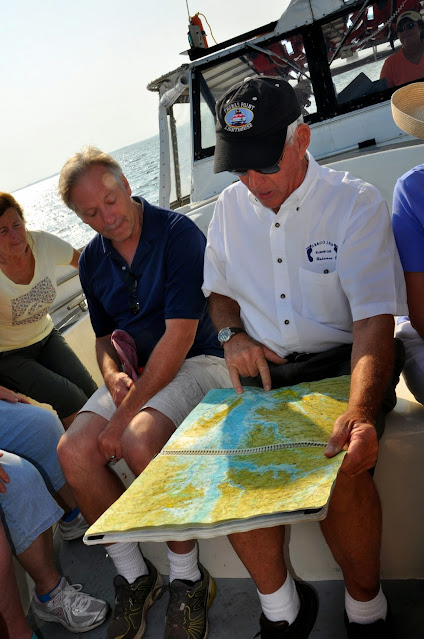 Our next stop was the unusual looking and somewhat isolated Solomon's Lump Light, a former lighthouse built in 1893, missing the house. Originally, a 25-foot-tall, octagonal keeper’s dwelling was built around a square brick tower, which formed two of the lighthouse’s eight sides. Solomons Lump was converted to unmanned status in April 1950, after which time the station’s condition worsened. Sometime around 1971, the dwelling portion of the lighthouse was demolished, leaving the brick tower standing off-center on the northwest side of the caisson. Despite lacking the house, this distinctive light is quite handsome.

From there, we headed to Hollands Bar Lighthouse. Hollands Island is another of the Bay's disappearing islands, having finally sunk below the waterline as recently as October 2010, when the last house, a two-story Victorian farmhouse, finally disappeared below the waves.

Once five miles long, Hollands Island, which was settled by European colonists in the 1600s, was home to a fishing community of 250 to 360 people, with more than 60 homes, a church and other buildings and a thriving fleet of workboats, including schooners and 55 skipjacks. According to a Washington Post article, sea levels in the Chesapeake are rising faster than they are in other coastal regions of the United States. One reason is ancient: The land here has been slowly sinking for thousands of years, settling itself from bulges created by the weight of Ice Age glaciers. The weight of glaciers to the north pushed the Earth's crust down, and the crust in this area went up like the other end of a see-saw. Now, the whole region is slowly sinking again. The other reason is modern: climate change. The Earth's oceans are rising because polar ice is melting, and because warmer water expands. Holland Island was especially hard-hit: Like other Chesapeake islands, it was made of silt and clay, not rock, so its land eroded readily.

In any case, all that's left of Hollands Island is the Hollands Bar Lighthouse, erected in 1889. It was originally a lovely white hexagonal cottage screwpile lighthouse. And there's a mystery surrounding this lighthouse -- in 1931 Keeper Ulman Owens was mysteriously found dead at the lighthouse. Though there was blood and evidence of a struggle, no wounds were found on his body and the death was ruled natural. 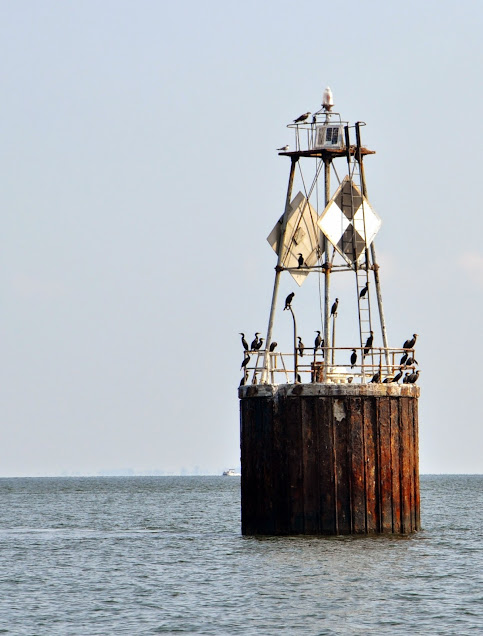 The death of the keeper wasn't the last of the lighthouse's mishaps: The lighthouse stood near the hulk of an old ship, the Hannibal, which was frequently used for target practice by Navy fighters. In 1957, Navy aircraft doing a routine practice night bombing raid mistakenly dropped targeting flares on the lighthouse instead of the target ship. The planes then proceeded to bomb the lliving crap out of the structure, demolishing the lighthouse and injuring the two poor lightkeepers, who must have been grateful the next morning to find themselves alive. The house was dismantled in 1960; it was replaced by an automated beacon mounted on the original foundation.

Likewise, our next stop was also a light mounted on the original foundation: Sharkfin Shoal Light, which was constructed as a cottage screwpile lighthouse in 1892. The lighthouse was demolished in 1964 and a skeletal tower was constructed on the original screwpile foundation. The Hooper Straight Light, built to mark the passage between Chesapeake Bay and Tangier Sound, is another example of the base being salvaged as a platform to host a simple light.

After going past the three lights, we were glad to see a real lighthouse again, when we came up to the Hoopers Straight Lighthouse. Finished in 1902, Hooper Island Lighthouse was one of only four Chesapeake lighthouses erected during the 20th century. Hooper Island Lighthouse was fully automated on November 21, 1961. Fifteen years later, someone somehow stole the light, necessitating the installation of a new solar-powered beacon. 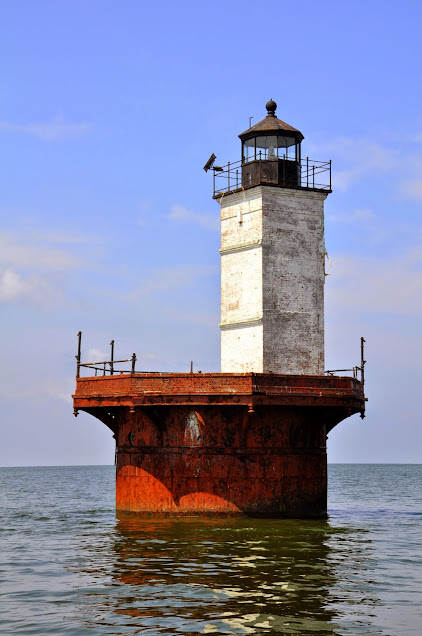 Then we returned to an old favorite before heading back to Tilghman Narrows to dock: Sharps Island Lighthouse, notable for its remarkable list to the starboard. Please see the May 29 2014 post to read more about that one, as well as see photos.

I've always wanted to explore the Chesapeake Bay and this tour of the Chesapeake lighthouses was a good way to get a better sense of the islands and history and fragile ecology. We got to visit Tangier Island and Onancock, VA, as well as Crisfield, MD. We learned about disappearing islands and tragedies on lighthouses, as well as got to enjoy the antics of pelicans and ospreys diving into the water. It was very fun, and despite all that time on the water, left me wanting to go on additional lighthouse tours! 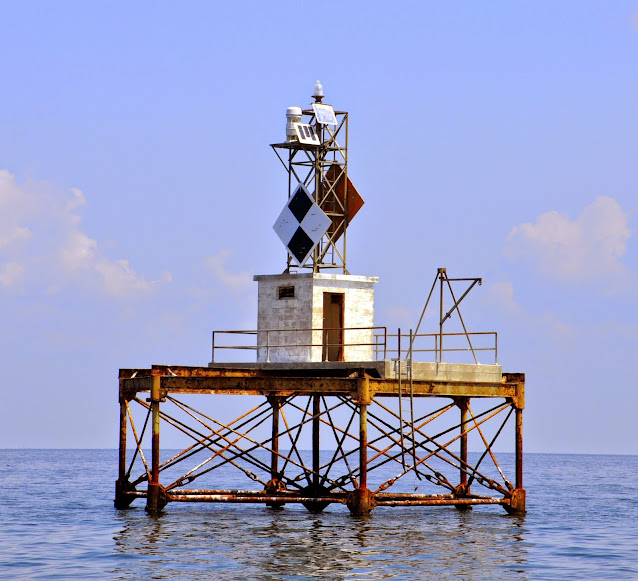