From 1828-1924 the C&O Canal functioned as a transportation route for goods and passengers on the 184.5 mile route from Cumberland, MD to Washington, D.C. Now it's a great day trip destination for millions of people each year. 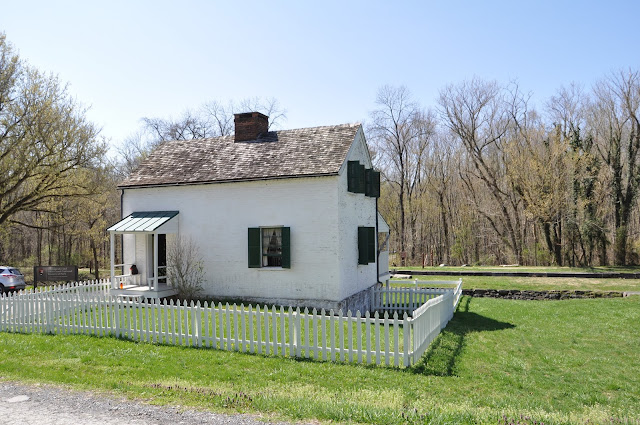 They come to bike or hike along the canal while enjoying the beauty of the Potomac River. Locks, lock houses, such as Lander Lock House, and aqueducts dot the towpath.

Lander House is now a living history museum, furnished upstairs and down in the 1920s time period.  But it's almost 100 years older than that. Built in 1836, the house is a simple brick house with two rooms downstairs, two rooms upstairs and a wide verandah that overlooks the towpath and the lock 29. Lander House is a typical example of what a 19th-century C&O Canal lockhouse on the eastern half of the canal looked like. Through the trees, the Potomac River can be glimpsed, although at the time the canal was active, the trees were cleared, leaving a lovely open view to the river. 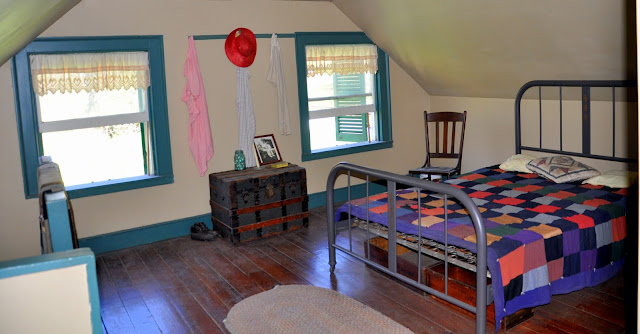 The Lander house is one of 26 along the C&O Canal. Of those, four are open, including Lander. That Lander is one of the restored homes is thanks to the Lander Community Association.

My sister docents at Lander House, and can be found there at least one Saturday a month. Two weeks ago, all the volunteer docents showed up to prepare the house for what I call the "day trip season," i.e., April through October. I went with her to give back in a small way to the C&O Canal, which has provided so many blog topics and lovely days for me.

Along with the other volunteers, we swept, dusted, and wiped almost every surface. As in many old buildings, there was plenty of evidence of mice, wasps, stink bugs, and other minute wildlife. Ugh. It was our job to remove that evidence and ready the house for the season's visitors, so they can learn about life on the C&O Canal. While we were cleaning the house, folks stopped by, excited to see the inside of the house. One man, who traveled to the area from Toronto, Canada, and was unable to come back, was allowed to look through the dusty rooms.

The house was dusty, cobwebby, and as noted, there was evidence of "critters." I joked that my house probably would have fainted if it could have seen me clean house like that. Still, I counted myself lucky to get to explore the house at will, and get to know some of its secrets. No, it's not haunted, my sister assured me. Working alone upstairs, I also sensed nothing but peace, although I experienced some distress at the inadequate cleaning supplies -- the dirt needed more than a broom and a dustpan! I wondered what the former lockkeepers' wives would have thought about the state of the house now, and was thankful they were at rest and could not see the dirt and dust.

Lander House will be participating in Frederick County's annual Bell and History Day on Saturday, 9 April. Frederick County Bell & History Day is held each spring as the opening of museum season in the county. Participating museums and historic sites offer free admission along with special events, tours, music, living history programs, and various activities. Although a bit out of the way from other museums in Frederick, it's definitely worth a visit! The C&O Canal is always worth a visit! 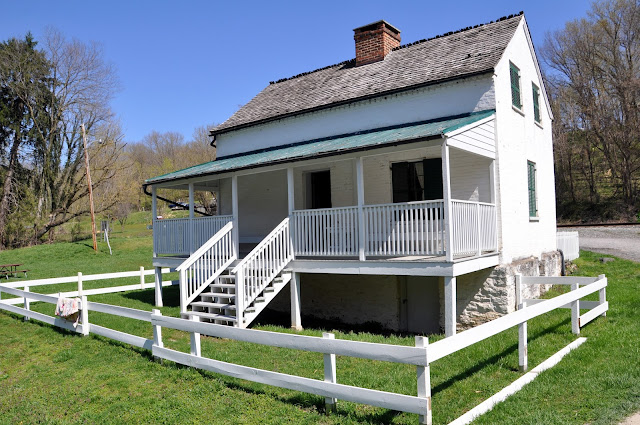 I almost named this post "Discovering Connections" but that would have made the blog more about me than the places we visit, and I try to keep focused on the destinations. However, in reaching out to interview other volunteers, I ended up receiving this kind note from Pepper Scott, one of the other volunteers at Lander Lockhouse; her note was extremely touching. The background to this is that my father had passed away, at age 83, a couple days before we showed up to help clean.

"I realized in the last day or so, that your father had passed very recently. My deepest condolences to you and your sister Karyn," she wrote. "I understand that your father was a colleague of Dr. Lewis, who was responsible for the restoration of the Lockhouse and the Catoctin Aqueduct.[Having the lockhouse open] would never have happened if it weren't for him, and only him. You are making a nice connection and it feels like a small part of the universe comes together with this Lockhouse. Thank you and your family. Bless your Dad, I understand he was quite a fellow also, and will be greatly missed."

Getting there: Lander Lockhouse can be reached from Frederick via U.S. 340 west. Take the U.S. 15 south exit toward Leesburg, Va. After six miles, turn right on Md. 464. Go one mile and turn left onto Lander Road. Turn left to cross the railroad tracks and proceed to parking area. If  you're hiking or biking the C&O Canal towpath, Lander House is located at the 51 mile post C&O Canal Lander Rd., Jefferson, MD 21755.

Hours: You can see the inside on Saturdays during summer (11 am–2 pm).