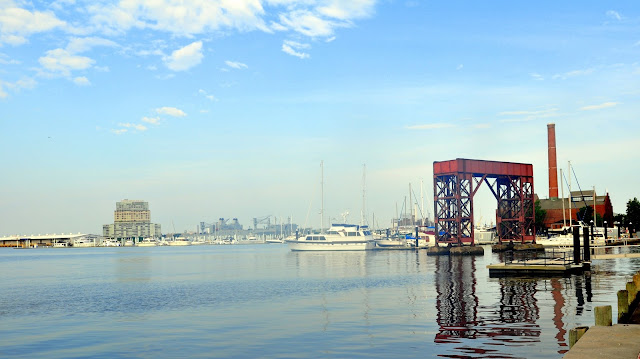 My friend suggested Baltimore's Waterfront Promenade as a daytrip destination earlier this year, and we'd been waiting for a weekend which we both had some free time to go explore it in its entirety -- or almost in its entirety. I am still amazed that I can live within minutes of some of these daytrip destinations and not have heard about them except by chance -- how much of our own neighborhoods go unexplored? 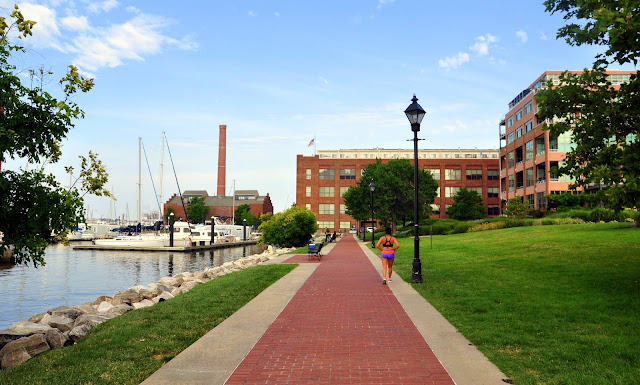 The Waterfront Promenade is a paved walkway that hugs nearly seven miles of the waterline of the Inner Harbor from Fort McHenry to the Canton Waterfront Park. We walked approximately 4.7 miles of it one Saturday morning, encountering not just sweeping views of the Inner Harbor, but also farmers markets and quaint streets in Fells Point, where construction on the waterfront forced us to head inland for a block or two -- well worth the minor detour because it led us past some coffee joints. 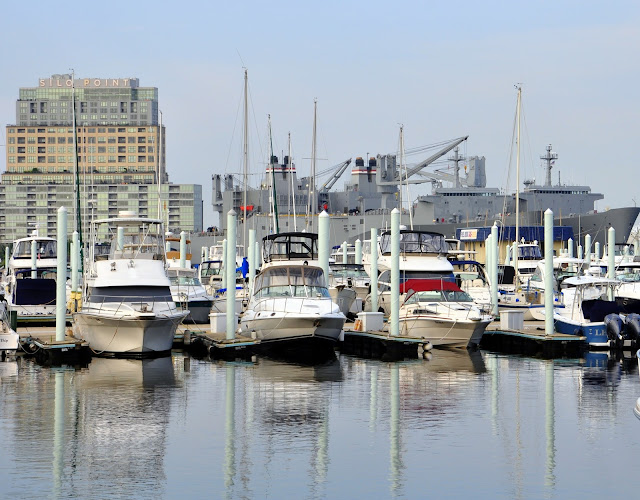 The Promenade began in the early 1970s as a 35-foot wide brick walkway at the current site of Harborplace, part of long-range plans to develop the Inner Harbor. Since then, the Promenade has been extended both east and west as the harbor has been developed. Although not all 7 miles are contiguous, nearly 5 miles of it is. You'll encounter joggers, dog walkers, local residents out for a stroll, and of course tourists -- but you'll encounter almost no bikers, because bikes aren't allowed on the Promenade.

As a dedicated bicyclist, I was at first saddened at the biking prohibition, but then realized it really made it more relaxing to walk, in part because it is such a busy trail. But the crowds aren't unreasonable -- at least not at 8 to noon on a Saturday. It was pleasant, and the views lovely. You could see remnants of the Inner Harbor's industrial past despite all the gentrification and the million-dollar condos and townhomes. 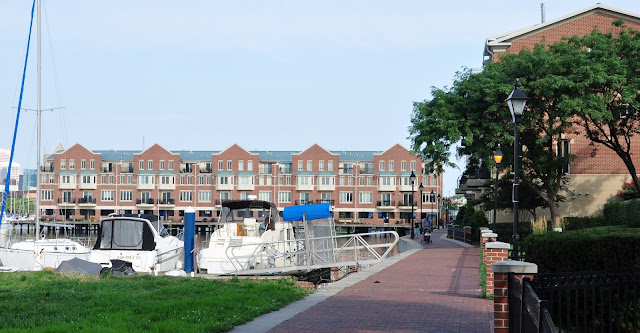 The Domino Sugar Factory still is a presence on the harbor and can be seen from multiple perspectives during the walk. 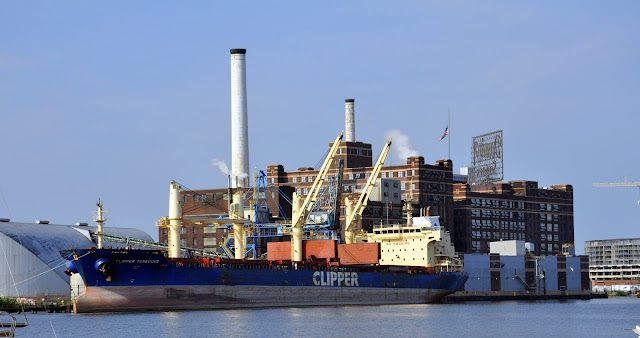 There is limited parking at the Korean War Memorial -- still plenty there even at 12:30 when we finally returned to our car. In Canton, it's well away from the crowded Inner Harbor area, where parking garages charge a small fortune for a few hours parking.

Over the past couple of decades, the Canton neighborhood has transformed from neglected industrial waterfront to marinas and expensive waterfront townhomes and condos. Despite the urban setting, I was startled but happy to see several grey heron during our walk, as well as a plethora of mallard ducks and Canada geese. We also saw cormorants, which I hadn't expected in such an industrial or urban setting. 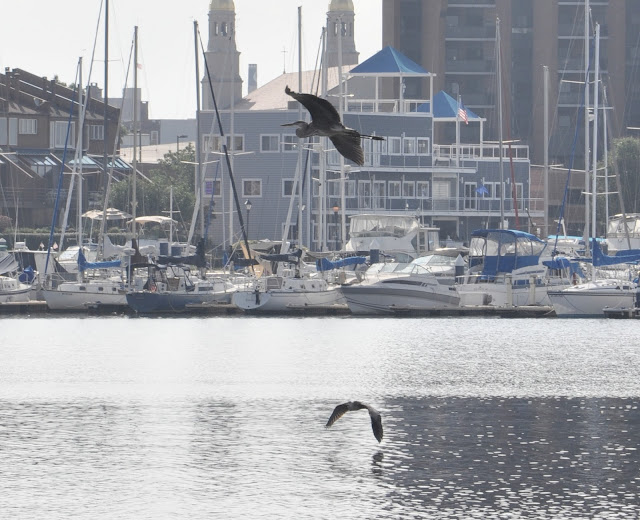 At just over 1 and a half miles, we came to Fells Point. Dating back to 1670, it's one of Baltimore's oldest neighborhoods. It became incorporated as its own town in 1763, but formally joined Baltimore just 10 years later. Be sure to keep looking behind you because the lovely golden onion domes of St. Michael's Ukrainian Catholic Church can be easily spotted. 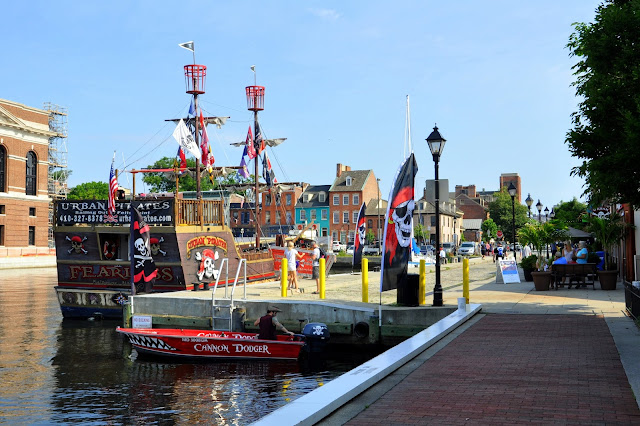 Soon, we rounded a corner and Baltimore's financial district came into view. 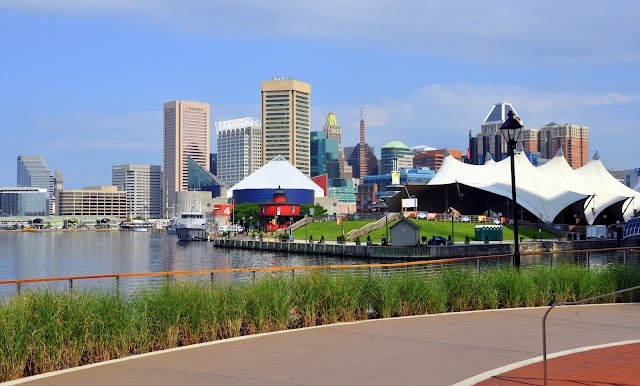 If you aren't into "just" walking and prefer to also do some more serious sightseeing, the Waterfront Promenade offers many different opportunities. Tour the Seven Knolls Lighthouse or visit the USCG Cutter Taney, the only remaining survivor of the attack on Pearl Harbor, sitting in the water to the right of the promenade. 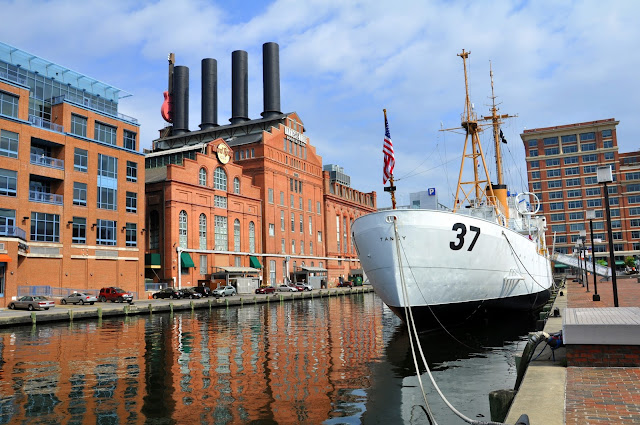 There are the more famous attractions, such as the National Aquarium or the Baltimore Public Works Museum, the child-friendly Science Museum, but you could also venture up to the 27th floor of the pentagonal World Trade Center for an unmatched view of the harbor and Baltimore's skyline. 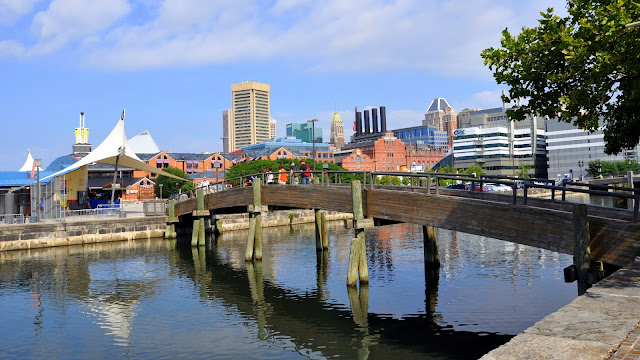 Ultimately, walking most of the length of the Waterfront Promenade revealed a side of Baltimore that we tend to overlook -- that Baltimore began, rather humbly, as a busy colonial port.

Know before you go: A map of the Promenade route is available in PDF format on the Waterfront Partnership of Baltimore website. The seven-mile walkway is not fully contiguous; in particular, several sections on the west side of the harbor are disconnected. Also, the Promenade isn’t entirely paved with brick. Stretches on the east side consist of boardwalk. All sections of the promenade are easily accessible by foot or wheelchair, but no bicycles are allowed.