It was one of those rare, incredibly gorgeous summer days: 75 degrees, low humidity. As any Marylander will affirm, those kind of days are to be treasured indeed. In fact, any beautiful summer day is likely to find me either biking on the C&O Canal or thinking about biking on the C&O Canal. I wish I lived adjacent to it. As it is, I have to drive at least 45 minutes to get to the closest segments. But that summer day found me re-arranging my work calendar so I could take the day off for a bike ride between Swain's Lock (at mile 16.7) and the Seneca Creek Aqueduct, adjacent Rileys Lock.


Today we know the locks by both numbers and informal names -- usually after a prominent lockkeeper (such as Swain's Lock) or a nearby town (such as Lander Lockhouse). Just to make sure it's as confusing as possible, some locks are known by more than one name and some are only known by their number. The names of the lockkeepers changed over the years, and the nicknames also changed. For instance Lock 21 (now known as Swain's Lock) had many lockkeepers: Mr. Fuller (1830), Mrs. Susan Cross (1836), Robert C Fields (1839, although he was fired on 1 May 1846), Samuel Fisher (1846, 1851), and Jesse Swain (1924), hence today the lock is known as "Swain's Lock." 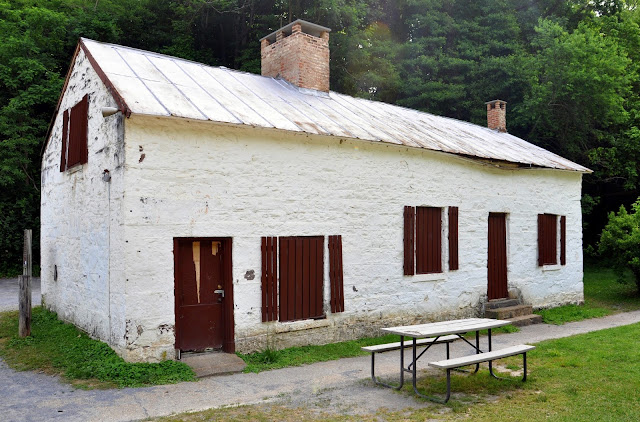 In fact, it's appropriate that a lock is now known by the Swain name: the Swain family had been involved with the canal ever since its construction: John Swain helped build the canal; his sons John, Hen, and Bill Swain were boatmen as well as Jesse Swain (boatman and later locksman). In fact, the Swains retained possession of the lockhouse until at least 2000, and possibly a few years after that. According a to a guide to the C&O Canal that was published in 2000 (The C&O Canal Companion, 2000), the Swain family maintained a concession stand ran out of the lockhouse that included boat and kayak rentals and snacks.

We headed up the canal toward Pennyfield Lock (Lock 22). Like Swain's Lock, this lock and lockhouse are known for the last lockkeepers, who also lived on in the lockhouse after the canal ceased operations in 1924. 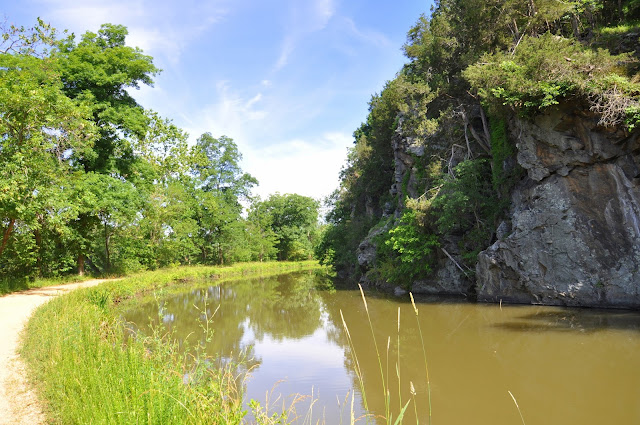 The next lock is also named after its last lockkeepers. Built in 1832, Pennyfield Lock is named after father and son lockkeepers, George and Charlie Pennyfield. George tended the lock from 1890 to 1910 and Charlie joined George on the C&O Canal payroll in 1900, and was the last lockkeeper to tend that lock. According to a sign posted near the lockhouse, Grover Cleveland would sometimes come to that lockhouse for fishing get-aways, trying to escape the stress of being President of the United States. But see for yourself -- you can reserve the lockhouse for an evening (or two) to stay overnight. 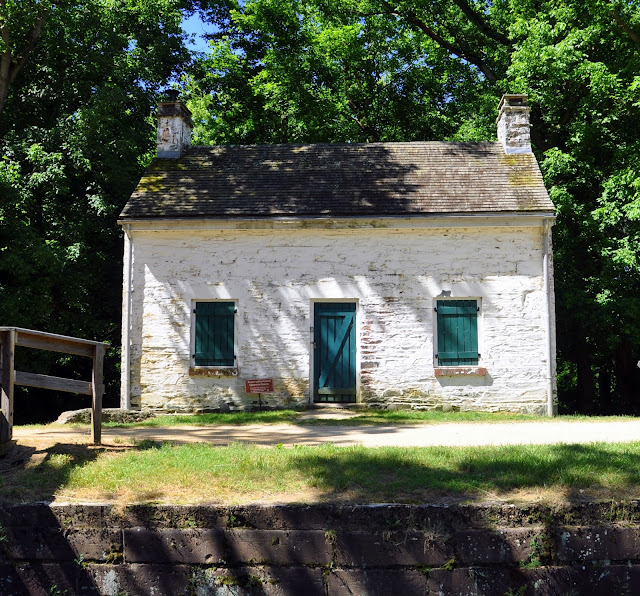 Soon after encountering Pennyfield Lockhouse, you'll come upon a sign announcing the Dierssen Waterfowl Sanctuary, a 40-acre marshy tract of land maintained by the Maryland Department of Natural Resources. As we passed this area, we wished we had kayaks, so we could explore. The area is a well known habitat for waterfowl, wading birds and songbirds, and from the canal you can see one of the nesting boxes for wood ducks. 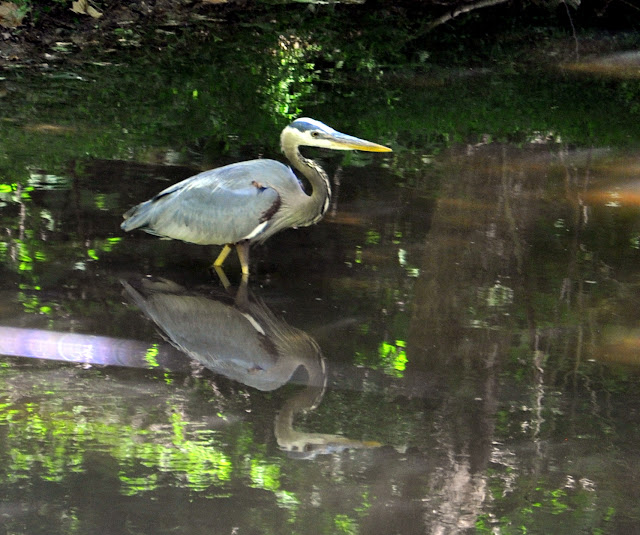 Soon, you'll encounter Violettes Lock (Lock 23), although the lockhouse, if there had been one, is gone. Here there's a "guard" lock, essentially a water intake for the canal, that keeps it watered down through Great Falls.

The Canal goes dry at Violettes Lock, unfortunately, although as a result, trees growing in the canal itself help keep the towpath shaded, so on a hot day... it's a trade off between the beauty of having the canal watered and enjoying the welcome shade. Even on the 75 degree and low humidity day we were there, I still welcomed the shade. 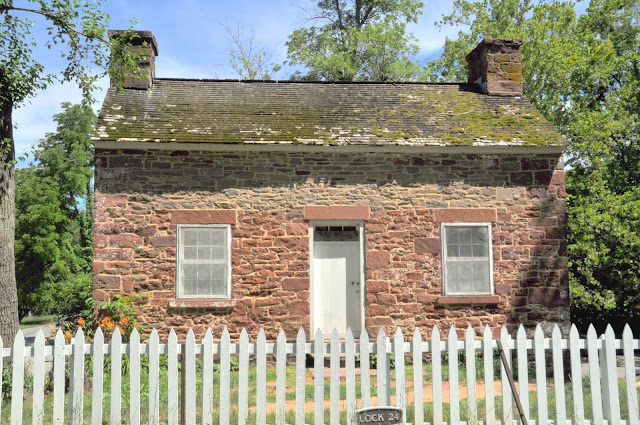 Soon we arrived at Rileys Lock and the Seneca Creek Aqueduct, made from the same distinctive red sandstone -- quarried just another small stretch further up the Canal -- as the iconic Smithsonian Castle. 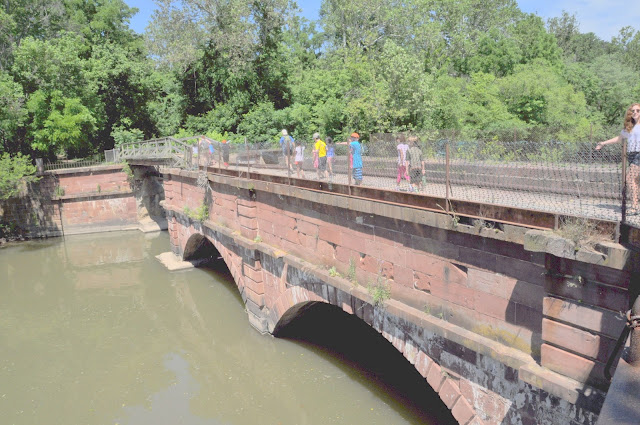 Seneca Aqueduct opened in 1833. Sadly, one of the arches is missing -- destroyed by a flood in 1971. There were 11 aqueducts built along the C&O Canal, but the Seneca Aqueduct is a unique structure, not only being the first built, but also the only red sandstone aqueduct on the C&O − and the only aqueduct that is also a lock.

Know before you go: There is limited parking at Swains Lock -- it was pretty full on a weekday. Plan on getting there early on a weekend to ensure access to parking.

Dogs: But of course! We saw quite a few dog walkers during our ride. 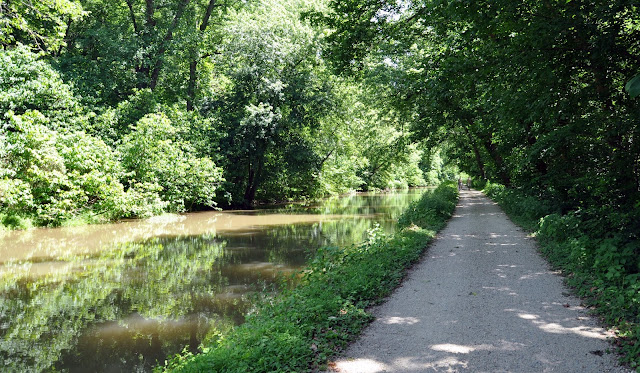