Returning to Hell House and Finding Everything AND a Kitchen Sink 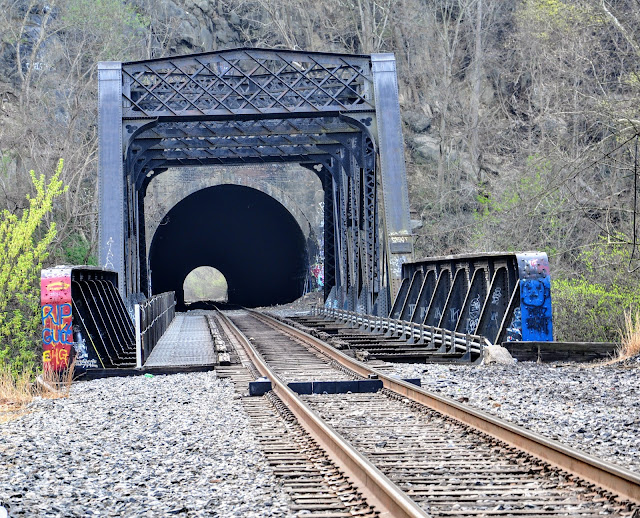 Last year my husband and I climbed the steps from the still-active train tracks just above Ilchester Road to the old St Mary's Seminary site, adjacent the Patapsco River Valley State Park. Where once there was a thriving men's Catholic seminary, now -- as it was a year ago -- is just a pile of rubble, although the bricks from the old building, and a couple of columns and cornices are still visible in the heap.

This place is a favorite of local kids. Ghost stories and urban legends have spread throughout the area about the location and the nefarious religious practices that are whispered to take place there. Over time, locals began to refer to it as "Hell House," but I suspect that's as much because of the nuisance and hell-raising by the local kids than more sinister religious rites.

If you go up another set of steps, you'll attain the ridge and the site of an altar, which some suggest is the nexus for the supposed Satanic purposes. 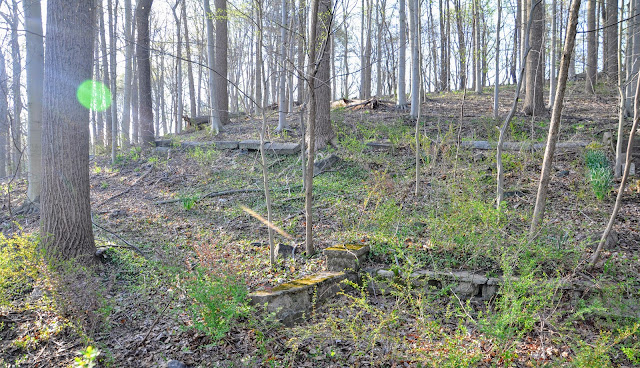 If it is haunted and filled with demons, I don't feel it. The entire site feels peaceful, serene, tranquil in the early spring, on a bright, sunny Saturday morning. Even though, or perhaps because nature is reclaiming its own, this is sanctified space. Birds chirped in the trees; squirrels frolicked amongst the high branches, oblivious to our intrusion. 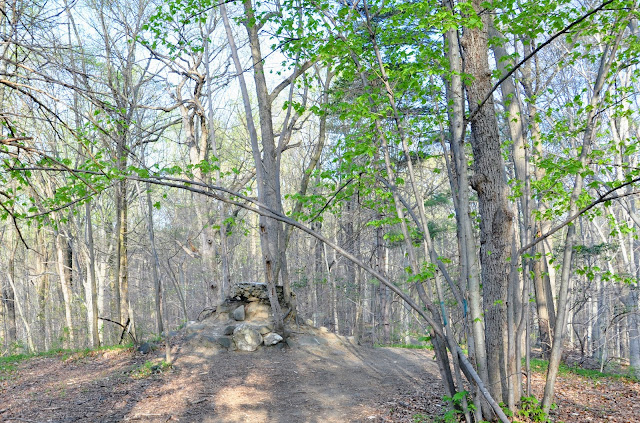 Last year we'd stopped at the alter, and I'd mourned that the old chapel cupola was gone. Readers emailed and responded (thank you, by the way!!), and I soon realized I'd not gone far enough into the woods.

So this post aims to set that right and satisfy my own curiosity.

My friend, Lisa, and I headed for the steps leading up from the train tracks to the old St Mary's Seminary site, this time skirting the pile of rubble, and heading back beyond the old alter, in search of the erstwhile missing cupola. 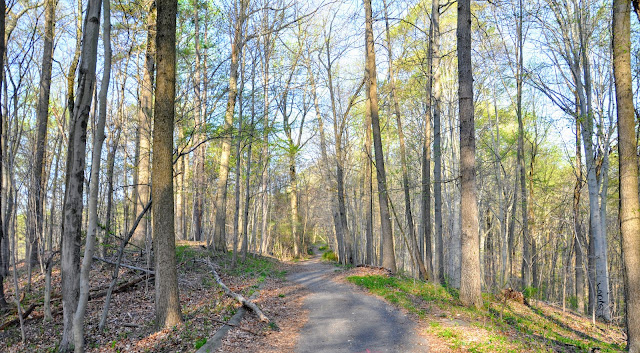 We encountered an old road, still mostly paved solid, leading nowhere, really, other than simply back in time. At least, that's how we felt as we journeyed down this old, unused road. Down the slope from the road, there were old stone ruins, spray painted in bright multi-colors by the vandal hordes. 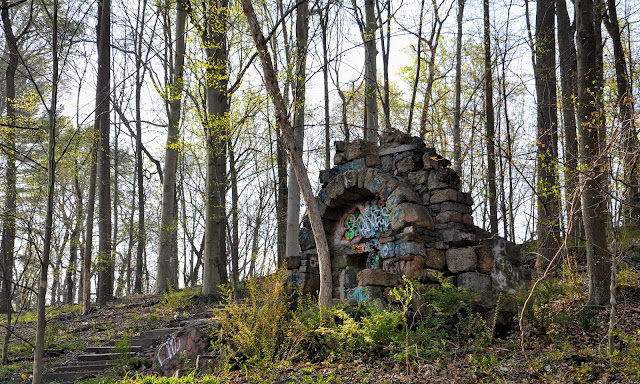 A path leads off of the road to the cupola. 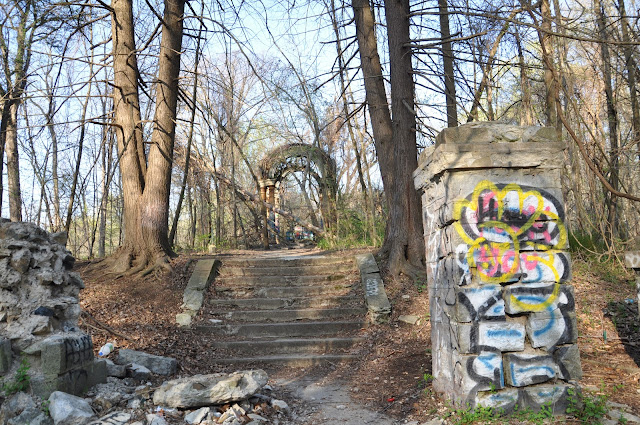 So we found the old cupola, overgrown with vines, starting to be reclaimed by nature. The vandals have spray painted everything up there, including the old cupola. The old iron cross which some fairly recent photos depict is also gone. It's sad that these ruins that mark a community that used to inhabit this ridge can't be allowed a dignified retreat into obscurity. 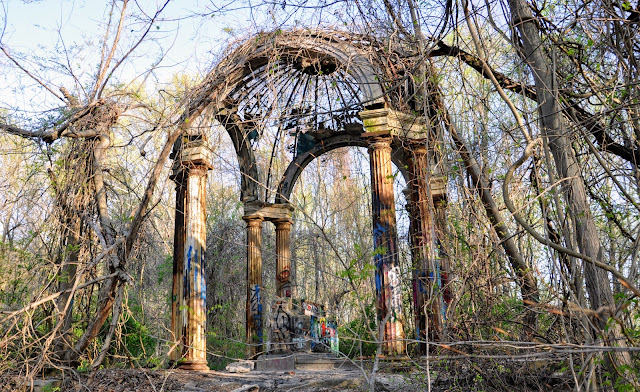 On the other hand, for the most part, the graffiti is bright and colorful and cheery, and does much to dispel the Satanic urban legends associated with the place. So what was probably meant as desecration has somehow, ironically flipped on its intention. 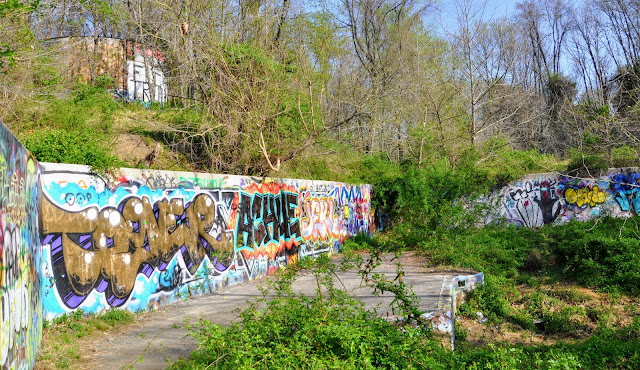 We followed the road, and soon encountered what at first we thought was an old outdoor theater, but after some investigation, we realized was probably an outdoor pool. Again, graffiti artists have made their mark on the place, which brightens up the spot, to be honest. 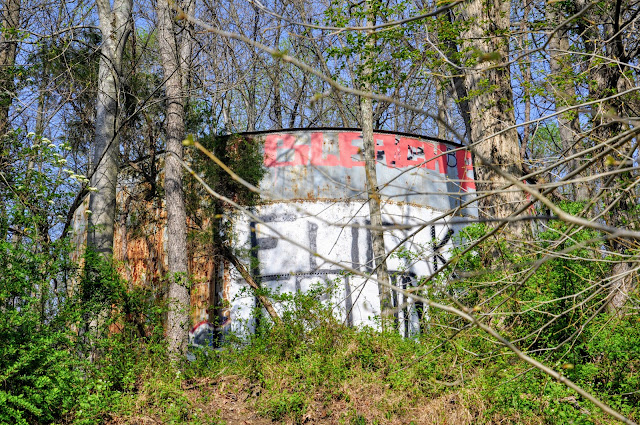 What looks like an old water tower is emblazoned, thanks to those vandalous hordes, with an anti-Trump message, which, although we regret the vandalization of the ruin, we can hardly disagree with.

To the right, as we faced the water tower, we saw the remains of an old VW van, crumbled and, of course, gleefully spraypainted. We headed toward that, and then saw a trail leading further into the state park. 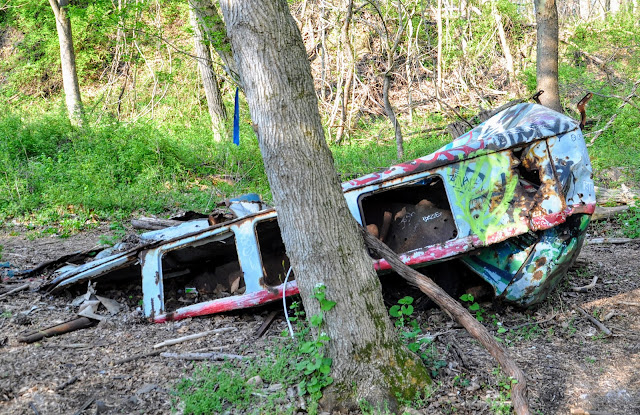 Not keen to turn around quite yet, we continued to follow the path. From local information as well as indications on the trail itself, it's quite obvious that the trail is often used by mountain bikers, although we didn't encounter any that day. After leaving the area immediately around the cupola, we were quite alone in the woods on the ridge. We noted the area had once been a dumping ground for garbage and debris. There was an old fashioned, very cool, but sadly, irreparably chipped porcelain sink, possibly an old-time refrigerator or ice-box, and assorted car parts strewn around the woods. 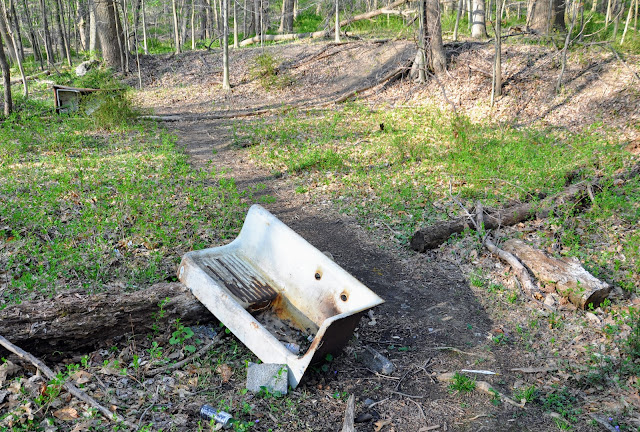 Lisa expressed her amazement that despite having lived within 5 miles of this place for over 2 decades, she'd never realized all this was up there. I agreed -- I'd shared her amazement last year when I'd first discovered St. Mary's for myself. 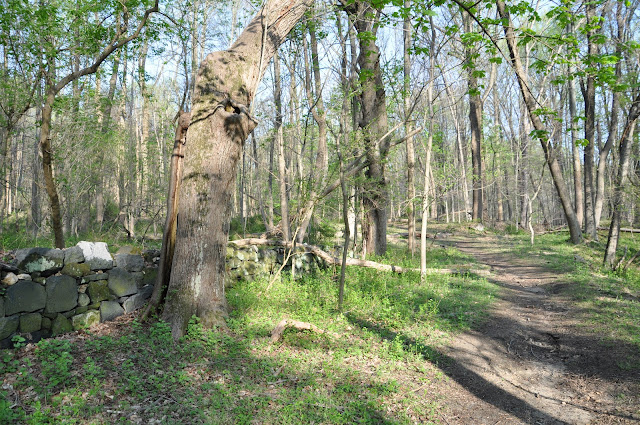 There were additional signs of habitation: an old stone wall denote a now meaningless boundary along the forgotten road. Metal shacks disintegrate into the earth. 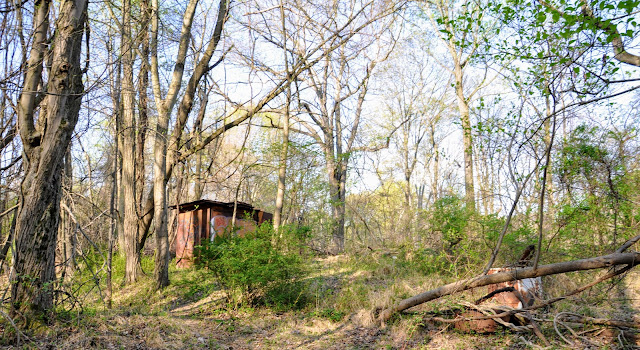 Then we came to what appeared to be flag poles. And a foundation of a large-ish building. And then, what really looked like basketball court markings on what seemed to be a macadam playground hidden by a layer of leaves and dirt. Was there a school here at one time? Who went to this school?* 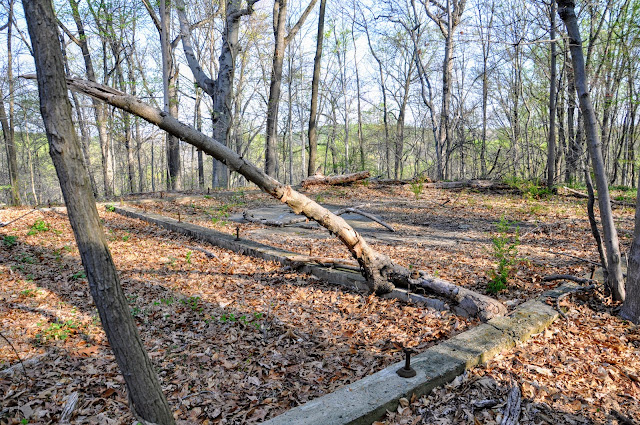 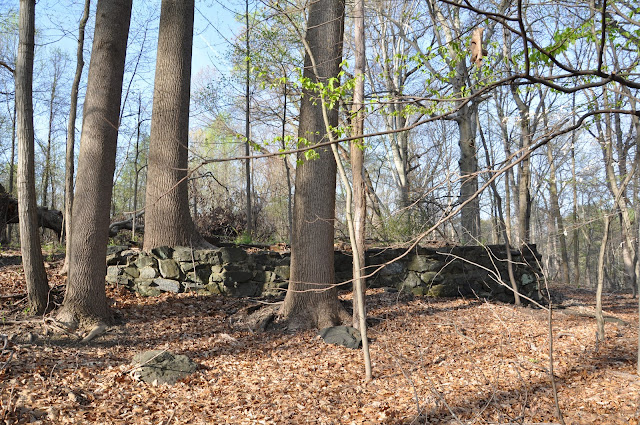 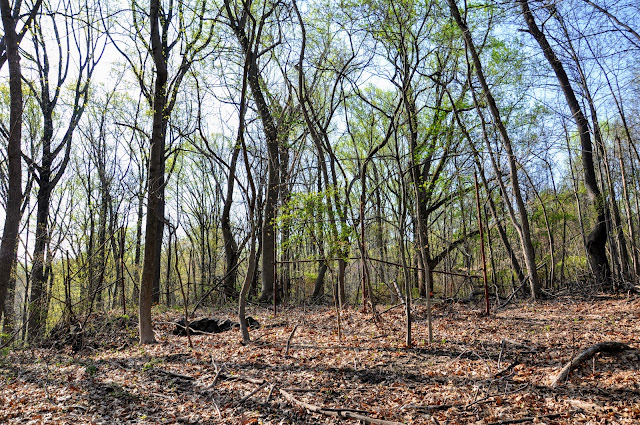 We nosed around in the brush but found no answers -- we'll keep our day jobs, failed amateur anthropologists that we are. Birds chirped and went about their business in the trees above us. A couple deer startled as we came by, and bounded down the slope. Squirrels nattered at us from high up in the branches, finally impatient at our intrusion into this abandoned space. Suddenly, we felt as if we were aliens in the landscape, unwelcome and unwanted. Humans were no longer welcome for long stays here, the woods seemed to say. 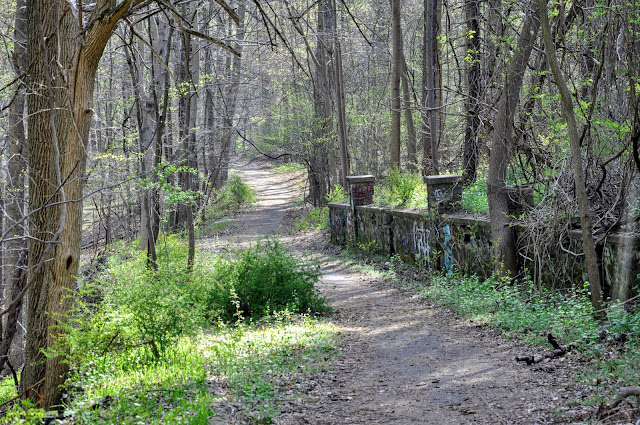 We turned around, following the trail back past the old swimming pool and water tower, back past the old cupola and the spray-painted stone ruins, back to St Mary's pile of rubble, out of this ghost town, to the old road which we followed down the side of the mountain, to Bonnie Branch and Ilchester roads, and back to civilization.

So, why go exploring up here? You will feel like part urban explorer, part anthropologist, as you survey the remnants of a long, lost community, another Maryland ghost town. You'll find clues, although no answers, to the buildings and the people who inhabited them. In short, you will find everything, AND a kitchen sink!

Getting there: From Route 100 in Elkridge, MD (just off of Rt 95) take Meadowridge Road exit and follow Montgomery Road past the stoplight at Lyndwood Drive; continue for just over 1.5 miles, turn right onto Ilchester Road. Follow Ilchester as it travels past two schools (on the right), a Catholic church, the old St. Mary's Cemetery, and down the hill. At the bottom, park alongside the road, but not directly under the railroad tracks, as you WILL receive a parking ticket.

Dogs: Absolutely not. There is too much broken glass around the ruins for those tender paws.

* In chatting about the hike with another friend at a later time, I learned that the school site may have been the former site of the school attached to Our Lady of Perpetual Help Catholic Church, which may have moved to its current site on Ilchester Road sometime in the late 1950s or early 1960s. 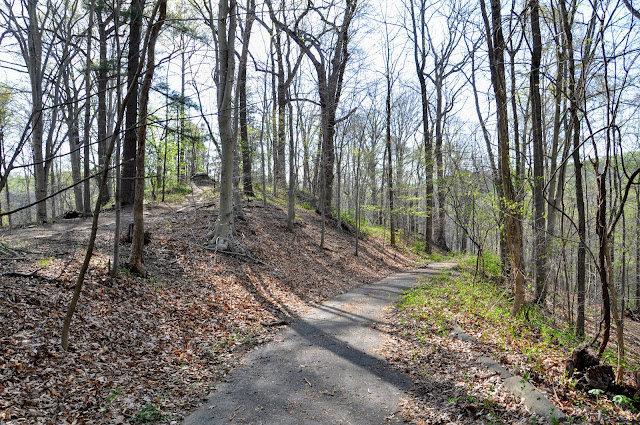 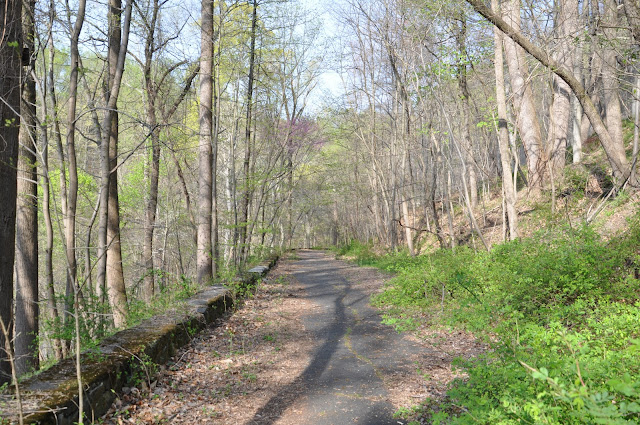