The Carrie Blast Furnaces, overlooking the Monongahela River in the industrial town of Swissvale, PA, remain an eerie reminder of Pittsburgh's steel industry past, and the conditions the workers there went through. When an opportunity came up to participate in an "intimate ghost hunt" of the former steel mill, I lept at the chance. 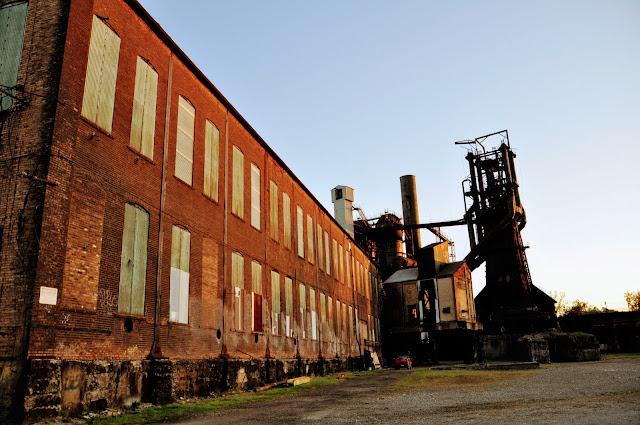 Built in 1884, Carrie Furnaces had formed part of the Homestead Steel Works, and operated almost a 100 years, until 1982. During its peak, the site produced 1,000 to 1,250 tons of iron per day. Steel from the mill helped build the Empire State Building, the Golden Gate Bridge in San Francisco, the Panama Canal, and other great landmarks of America's industrial age. 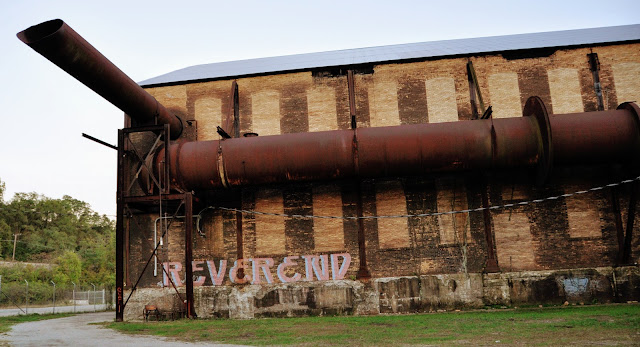 All that is left of the site are furnaces #6 and #7, which operated from 1907 to 1978, along with the hot metal bridge. The furnaces, designated a National Historic Landmark in 2006, are among the only pre-World War II 20th century blast furnaces to survive. 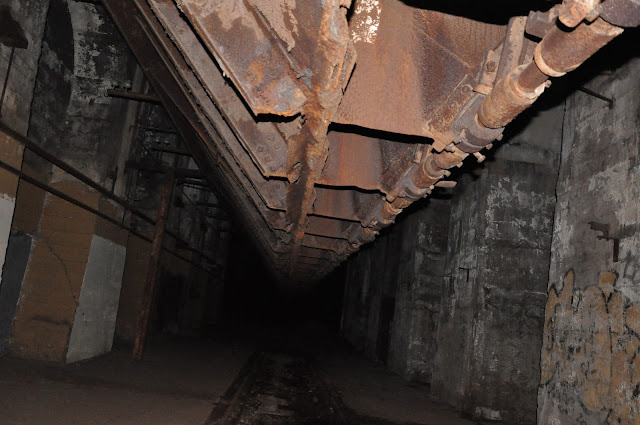 Until child labor laws went into effect in the early 1900s, children as young as 14 and 15 were employed there. As with the adults, many sustained injuries, some of them mortal. Women worked at the mill as well, often as carriers of water to the men working in the extreme heat of the mill. They were also exposed to many of the hazards of working in such a perilous environment. Needless to say, there were many deaths of the men, women, and children working there.

The site is currently managed by the nonprofit Rivers of Steel Heritage Corporation, which conducts tours and other programs from May through October. The paranormal investigation was run by Ghost N'at (pronounced "ghost en-at" -- en-at being a Pittsburgh region colloquialism, meaning "and all that"), a western Pennsylvania paranormal investigations and ghost hunt event group.

After having experienced it, I agree with Ghost N'at's claim that Carrie Furnace is the spookiest location, possibly ever! Because we were a small group -- just 10 of us -- we stayed together as one group. We visited several locations, including the tunnels, the blast furnace site itself, the locker room, and somewhere deep in the bowels of the machinery and pipes. Carrie Furnace is possibly both the coolest and scariest place I've ever visited. 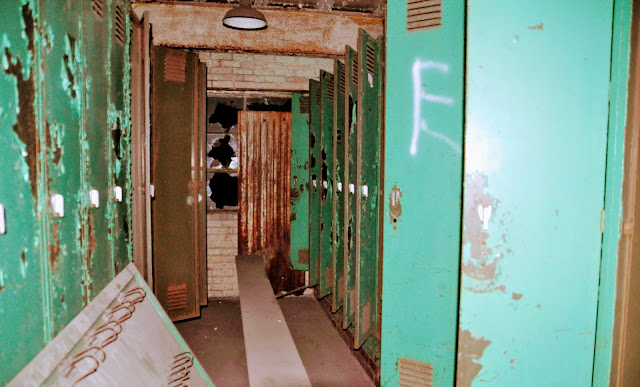 Voices and shadow figures have been captured by the Ghosts N'at staff on multiple occasions at the steel mill. The evening we were there was filled with evidence of the ghastly beyond.


Although we didn't see any shadow figures, I heard foot steps where there was absolutely no one (in a restricted area of the compound that is off limits to living humans) in the tunnel. We also heard EVPs (electronic voice phenomenon), and our K2 meters, EMF readers, and motion detectors all went off on multiple occasions. Very dramatically, Ken, one of our Ghost N'at guides for the evening, was able to invite the spirit(s) to turn two flashlights off and on, in response to questions we asked throughout the evening. Previously, Ken has spotted both a shadow figure and an actual apparition at Carrie Furnace.


Yes, I caught some orbs in our photos and in a short video (see below). But it was also a buggy evening, despite being in October. As of this post, I haven't had an opportunity to really analyze the video, but that's my next step.

I have to say, it was both eerie, startling, and really, really awesome.


Throughout the evening, everyone was invited to participate in the ghost hunt  and our two guides for the evening, Ken and Alex, made themselves available to the ghost hunt participants for questions or to check out evidence we may have collected, such as the video. They kept emphasizing that this was our ghost hunt -- that they were there to guide us, show us paranormal investigation techniques, and where the hot spots were. They clearly had done their homework previously

We were shown how to use the various paranormal investigation equipment, and then given opportunities to use it. We also were constantly encouraged to speak to the ghosts and ask questions ourselves: we were active participants in the ghost hunt.

I took away the following tips for conducting a paranormal investigation:

The group emphasizes the importance of being friendly to the ghosts, reminding us that "ghosts were people too." Unlike other ghost hunting event organizations, Ghost N'at rejects provoking the ghosts, instead relying on trigger objects (such as whisky, cigarettes, toys, etc.) and tried and true investigative techniques to make contact with the ghosts.

At times throughout the evening, I tried to quietly imagine the incredible din of the steel mill while it was in operation, the shouts of the boys and men, the noise of the machinery, and the heat of the liquid steel as it was channeled in dangerous, open canals to where it was cooled in forms and sent on to its eventual destinations. With the furnace looming over us, it was easy to lose yourself in imagining the din and chaos it must have been when active.

One member of our group was there explicitly for proof of an existence beyond our physical world. I believe she left convinced. So do ghosts exist? I believe there's a force and a plane of existence beyond the pale that we do not understand, and that occasionally, we're lucky enough to make contact with that plane. I do know that I was rarely actually scared at Carrie Furnace, although I was convinced that what was happening around us was real. I did stay with the group, and avoided the dark corners! 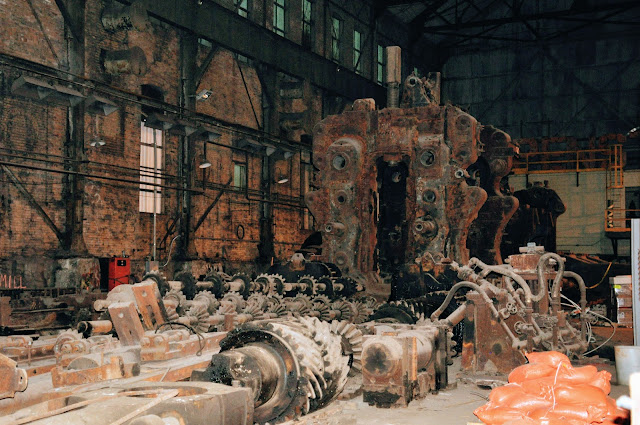 Whether you go for ghosts or just for an historical tour of the place, add Carrie Furnace to your bucket list. The place is amazing, and the massive machinery and pipes that make up this steel mill are on a scale you don't often see. I wish I could have been there while it was light out so I could have composed the photos and framed them to make more sense. Often that evening, I was just aiming into the dark, hoping for something (both a good photo and a ghost!). 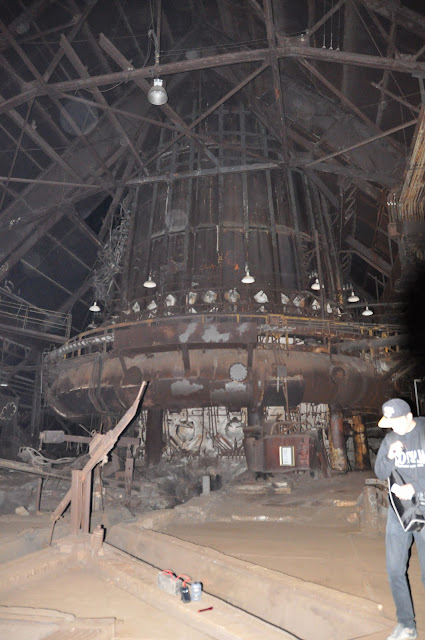 Know before you go: Whether you go at night or during the day, wear closed toe, comfortable shoes. If you go on a paranormal investigation, then where clothes you don't mind getting dirty -- chances are you'll end up sitting on the ground at some point.