Pennies for Poe at the Westminster Burying Ground 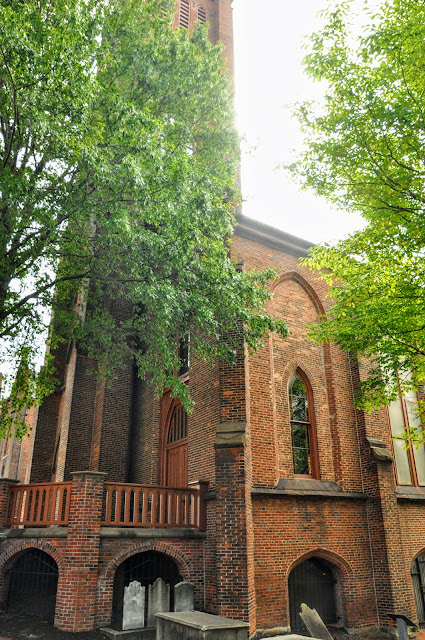 You can often learn who's important in a region by going to an historic city cemetery, and no where is this more true than at the Westminster Burying Ground in Baltimore. Established in 1787, a who's who of Maryland and Baltimore are, or at least, WERE (several seem to be missing) buried there. For 60 years, the graveyard became the final resting place for many important or influential merchants, politicians, statesmen, Revolutionary War and War of 1812 officers and soldiers. 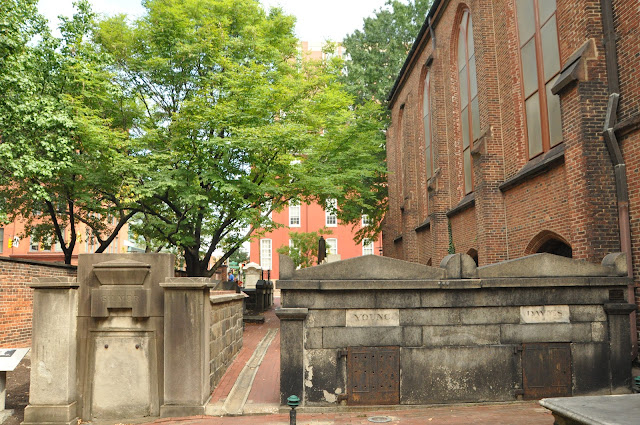 There you can find James McHenry, names for Fort McHenry and a signer of the U.S. Constitution; James Calhouns (last mayor of Baltimore Town and first mayor of the City of Baltimore), as well as several other U.S. Congressional representatives, senators, and Baltimore mayors. But no matter how notable they were in their lifetimes, they are all overshadowed by the cemetery's most famous resident: Edgar Allan Poe, who has not one, but TWO graves in the burying ground: his original grave, in the back of the burial ground, and a monument added in 1875. 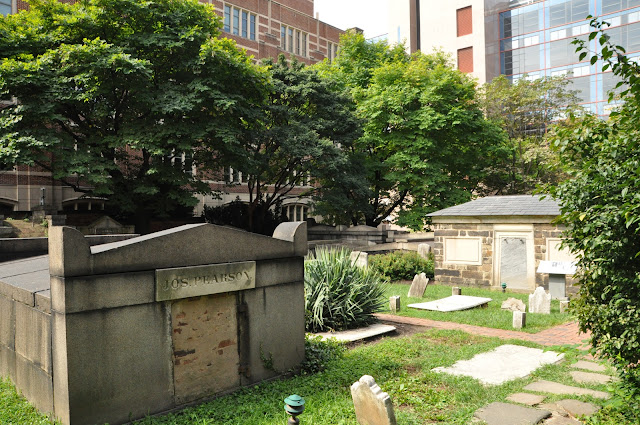 The Poe family owned a plot in the cemetery; Poe's original grave is marked by a headstone with an engraved raven. Poe's grandfather, General David Poe Sr., and his brother, Henry Leonard Poe, are still buried there. 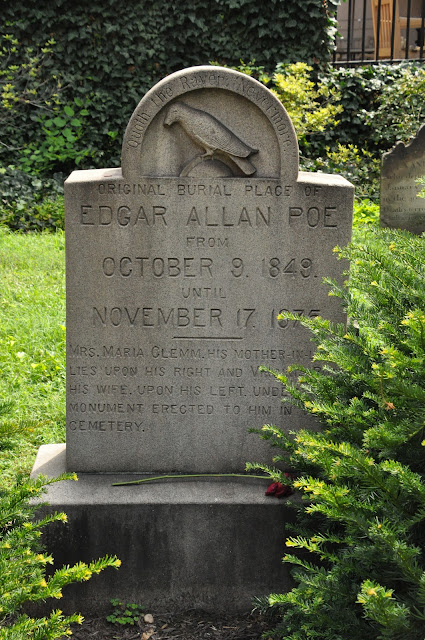 In July 1852, Westminster Presbyterian Church was erected over the graveyard, its brick piers straddling gravestones and burial vaults to create what later Baltimoreans referred to as the "catacombs." 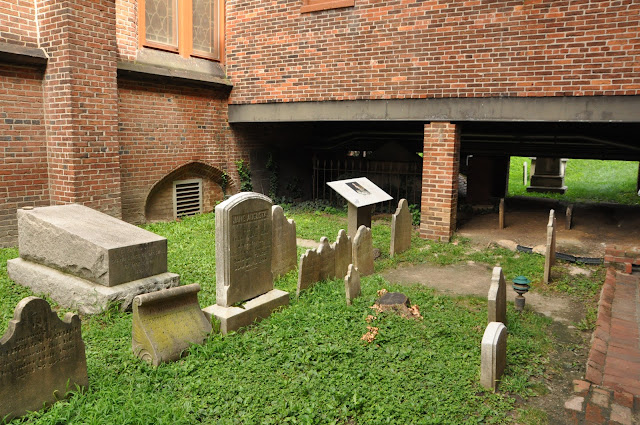 The Burying Ground offers three distinct styles of grave stones and markers, roughly correlating to three periods. The Early Years (1788-1800) is distinguished by gravestones with scalloped or square tops, straightforward expressions of the austerity and simplicity valued by the 18th century Presbyterians originally buried there.

Elaborate vaults mark the Golden Age (1800 - 1840) of the cemetery, reflecting the worldly success of the church members and their embrace of public displays of wealth. 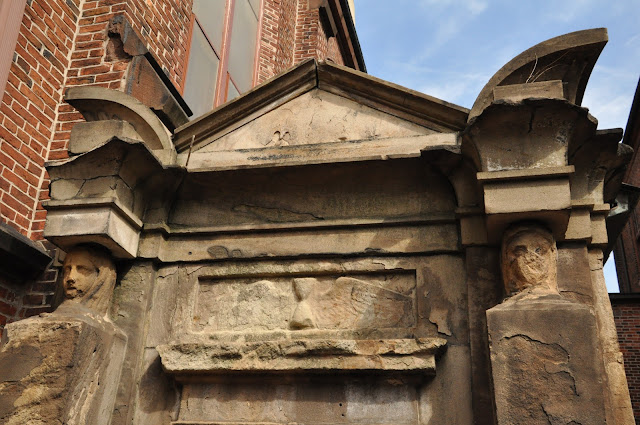 By the 1840s, however, monumental displays disappear as the wealthiest church members opt to bury their dead in the new, "rural" Victorian garden cemeteries such as Greenmount and Loudon Park. Many families even remove their members' remains. Those still choosing Westminster for their eternal rest tend to have plain ground slabs and raised tablets. 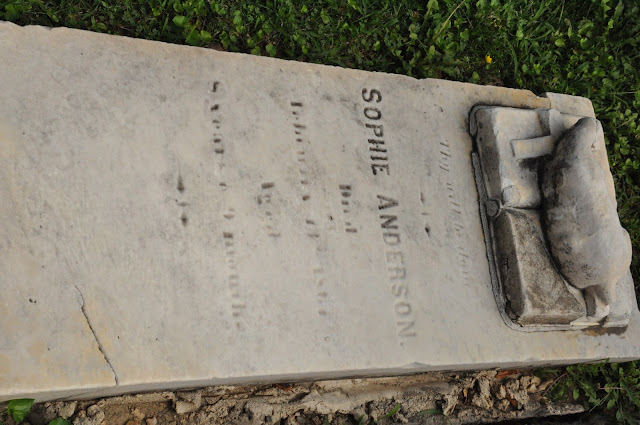 In 1875, a local school teacher started "Pennies for Poe," to raise money for the monument, where his wife, Virginia Clemm Poe, his aunt/mother-in-law Maria Clemm are also buried. To this day, it is traditional to leave a penny on Poe's grave. 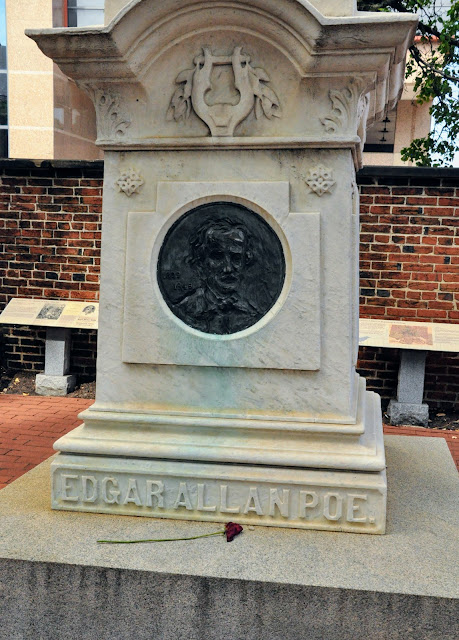 Although no longer an active cemetery (i.e., one that's accepting new interments), the Westminster Burying Ground welcomes visitors with interpretive signs discussing the history of the graveyard, mourning ritual, architecture, and biographical information about the "residents" -- tombstone tourism at its best! The church building is now owned and maintained by the University of Maryland Law School, which occupies the rest of the city block. The church building was renovated for secular use and is now known as Westminster Hall. 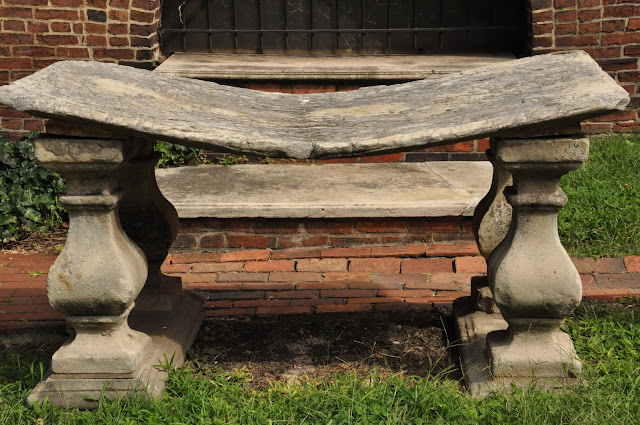 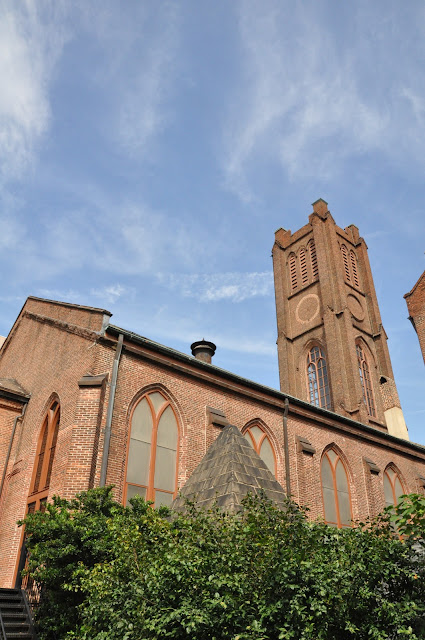