Baltimore's' Historic Ships: A Sloop of War and a Submarine 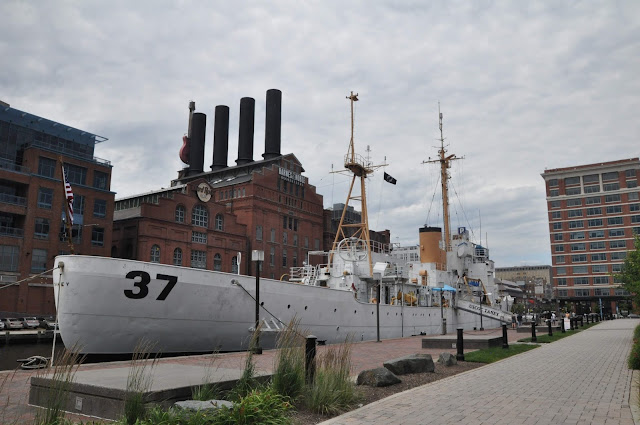 Historic Ships of Baltimore is a maritime museum located in Baltimore's Inner Harbor -- and is a good way to remember that the Inner Harbor for 200 years was -- and still is -- a major east coast port. There is so much to cover in this museum that it required two separate articles. This article looks at the USS Constellation, a sloop-of-war that is the last existing intact vessel from the Civil War, and the US Submarine Torsk, a submarine that served in WWII.

Historic Ships in Baltimore is a collection of military vessels spanning the mid-1800s through the mid-1980s. Located within easy walking distance of each other, the USS Constellation, the US Submarine Torsk, the US Coast Guard Cutter Taney, and the Lightship 116 Chesapeake exhibit life at sea for over 100 years. In addition, the Seven Foot Knoll Lighthouse, which marked the entrance to the Patapsco River and Baltimore Harbor for more than 130 years, is part of the entry ticket to the maritime museum. 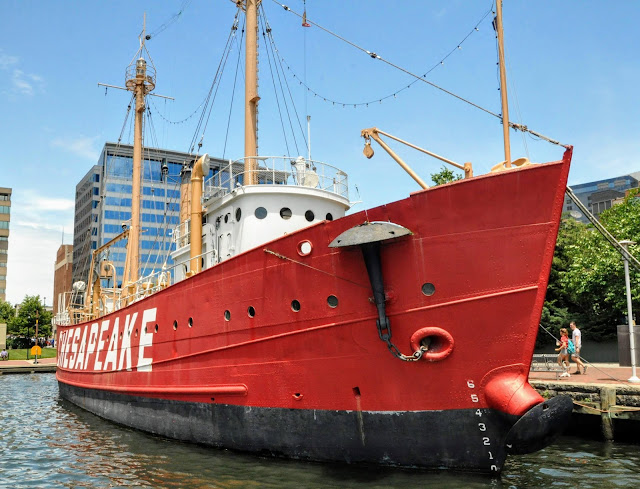 Part 2, which will be published next week, will look at the Lightship 116 Chesapeake, the US Coast Guard Cutter Taney, and the 7 Foot Knoll Lighthouse. 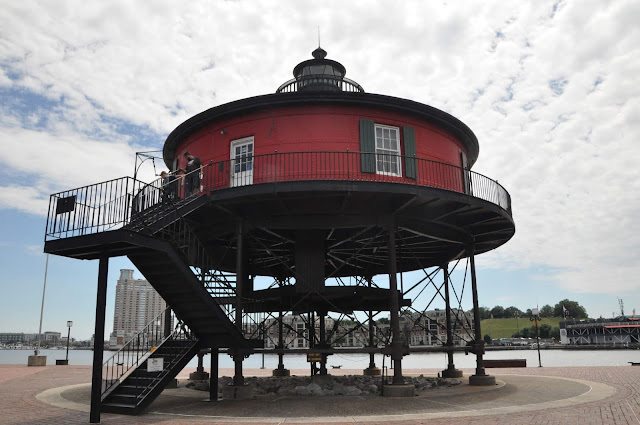 If you don't mind getting wet as you walk from ship to ship, this would make a good, summer, rainy-day activity -- and it's kid friendly as well. Several exhibits on the ships cater to kids and their imaginations.

Located at Pier 1, the USS Constellation is the last existing intact naval vessel from the Civil War, and was one of the last wind-powered warships built by the U.S. Navy. 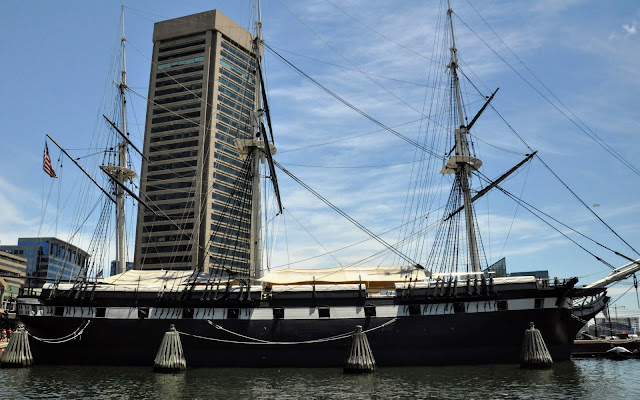 She was built in 1854, using a small amount of material salvaged from the frigate USS Constellation, which had been disassembled the year before. Despite being a single-gundeck "sloop," she is actually larger than her namesake frigate, and more powerfully armed with fewer but much more potent shell-firing guns. 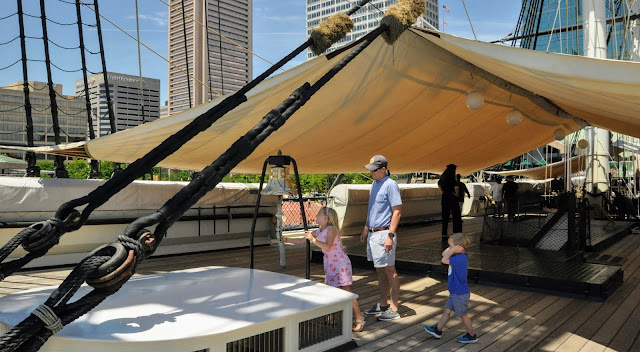 Launched in August 1854 and commissioned in July the following year, she remained in service for close to a century before finally being retired in 1954. During this period, she participated in one way or another in all the major wars. 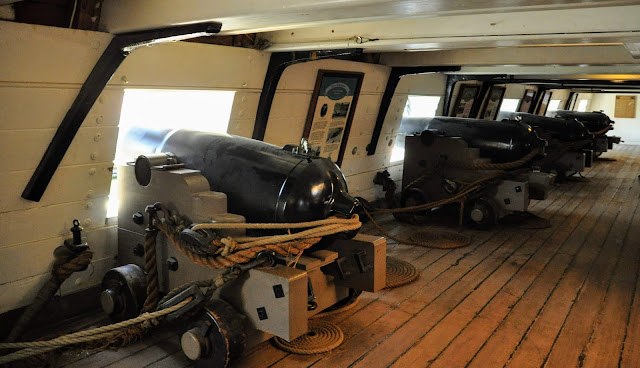 Before the Civil War, she helped enforce the ban on importing additional kidnapped African men, women, and children into slavery in the southern states. But when President Abraham Lincoln declared a blockade of all ports of the Confederacy in 1861 she was recalled from her anti-slavery mission and sent to Portsmouth, NH. Soon, though, she was dispatched to the Mediterranean on 11 March 1862 to patrol for Confederate commerce raiders attempting to attack Union merchant shipping, since her sails provided much greater endurance than the steam-powered warships of the day.

In 1865, she was recalled back to Fort Monroe, VA on 25 December, and most of her crew, whose enlistments had ended, were discharged. Without a crew, the USS Constellation spent the remainder of the war as a receiving ship based in Norfolk, where she remained until 1869. 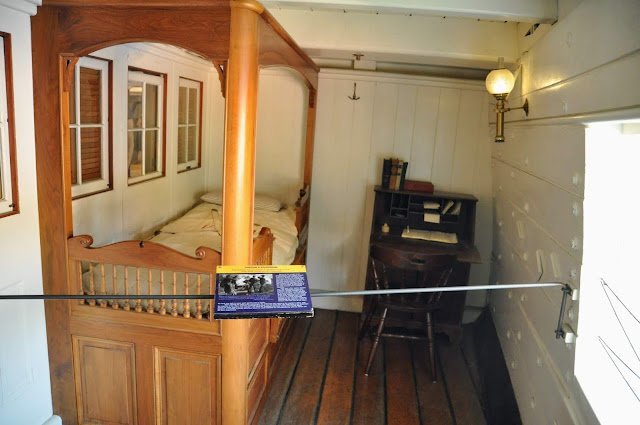 Afterward, she served as a sailing training ship for midshipmen and then was sent on good will relief missions, carrying a large cargo of food and other supplies to Ireland for the relief effort for the 1879 Irish famine. 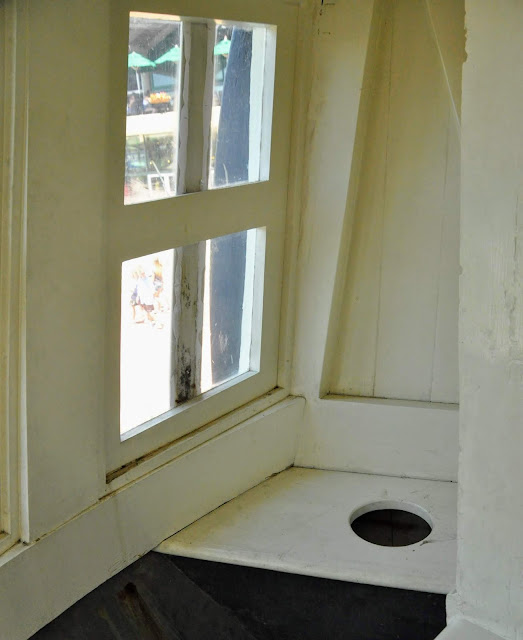 Now she continues her good will mission by educating the public about Naval history and life and work aboard a sloop-of-war. She is a magnificent ship. 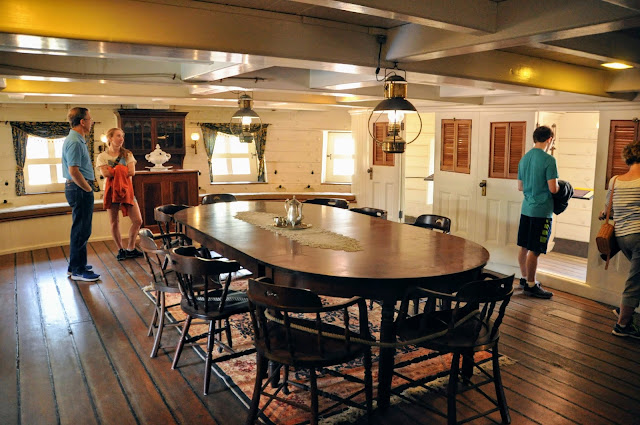 Once on board, uniformed crew members can answer questions as you explore four decks to explore, each one different. All the sailing action took place on the top or "spar" deck. Head down one deck to the gun deck and the ship's main battery of guns, the Captain's Cabin and the Galley. Head down the stairs still further, to the berth deck where most of the crew lived and socialized. Finally, the last stairs lead you down into the ship's hold where food, water and gear for a crew of 325 was stowed. 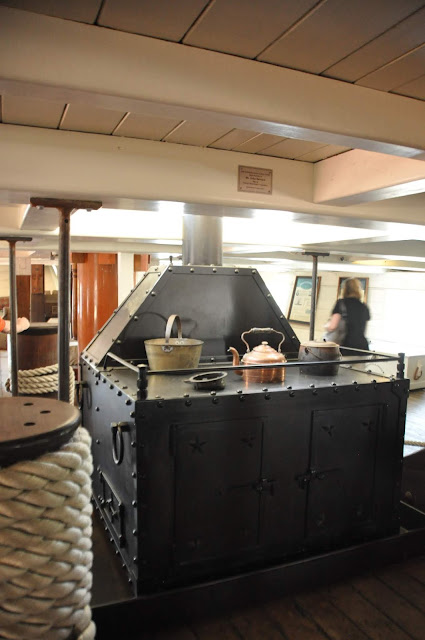 Located at Pier 3, adjacent the National Aquarium, the US Submarine Torsk is probably the coolest of the four ships. This Tench-class submarine built for the US Navy during World War II was armed with 10 torpedo tubes. 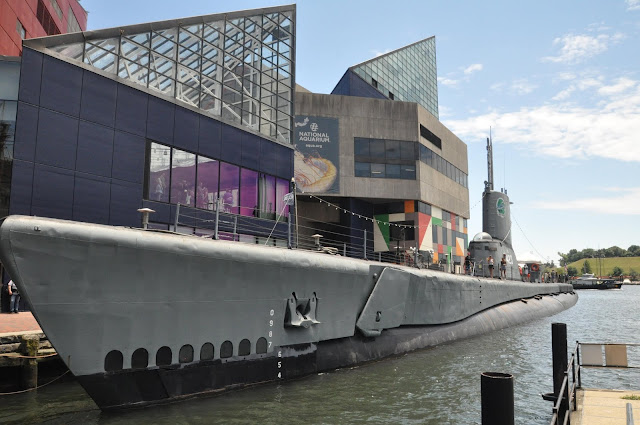 During WWII, American fleet submarines were named after fish or other sea creatures. Torsk is the Norwegian translation for the Cusk, a food fish of the cod family. 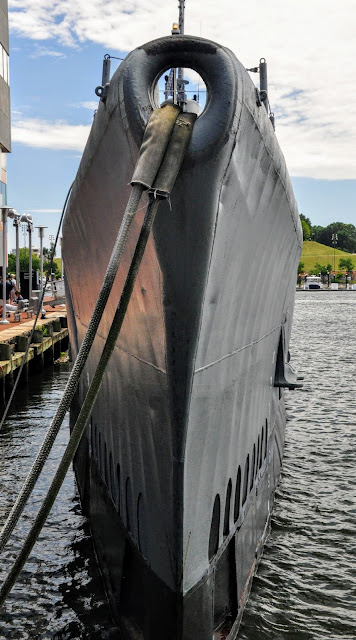 In 1945, Torsk made two patrols off Japan, sinking one cargo vessel and two coastal defense frigates. The latter of these, torpedoed on 14 August 1945, was the last enemy ship sunk by the US Navy in World War II. Throughout the 1950s and 1960s, she operated primarily as a training vessel. 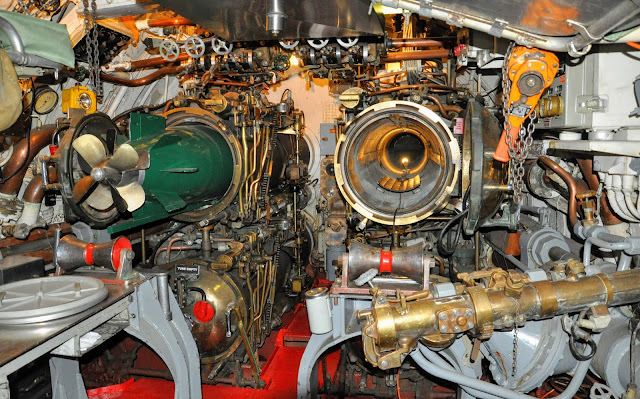 The tour starts at the stern, where you descend into the submarine in the torpedo rooms before heading toward the bow, through a series of "rooms": the navigation station, the operation station, the engine room, the crews mess and crew berthing areas. 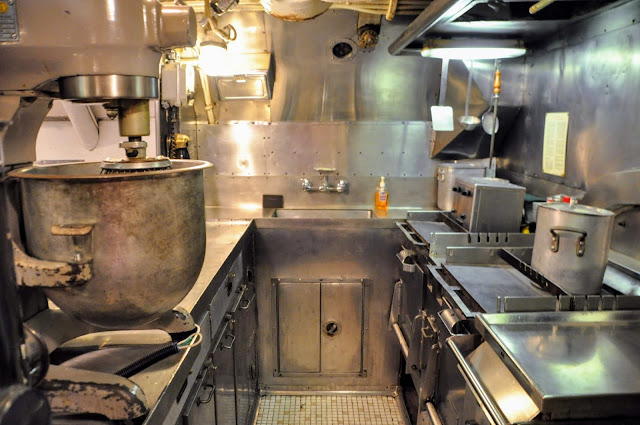 If you think it's cramped inside, with a handful of tourists, consider how it must have felt with a full complement of crew members -- more than 80 sailors lived aboard Torsk in very crowed conditions where the only way to pass someone was to turn sideways. 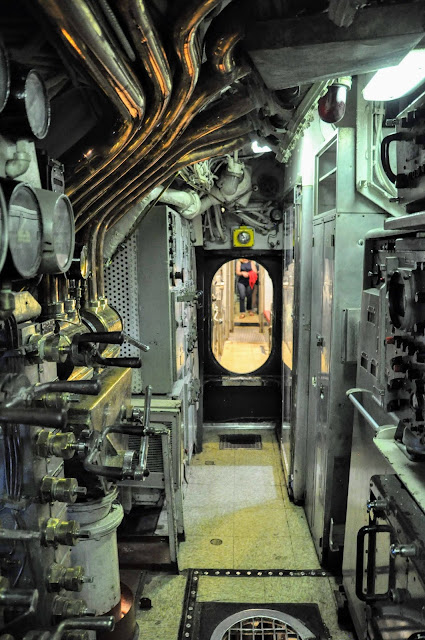 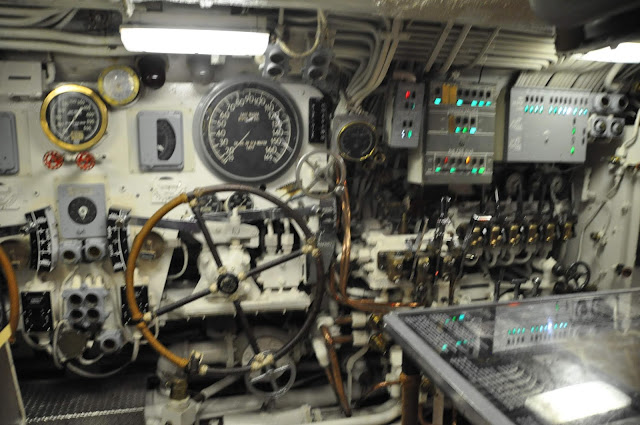 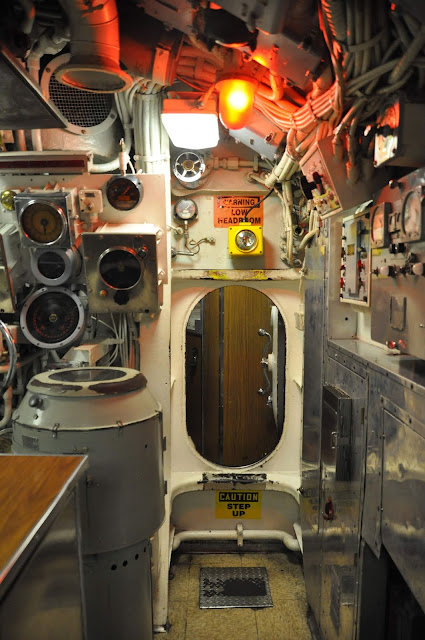 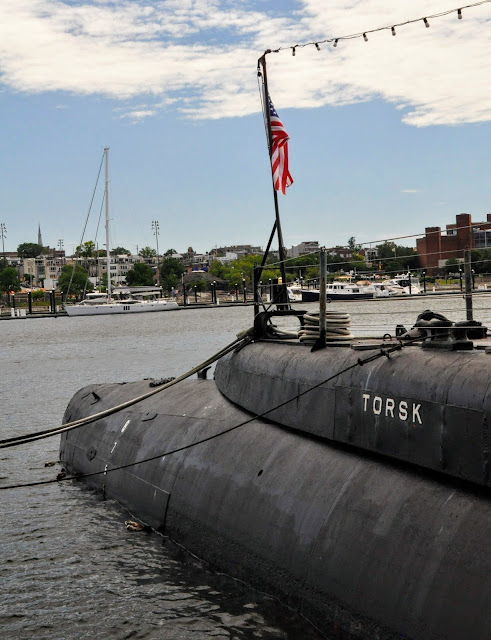