During the COVID-19 pandemic, we followed Maryland's "stay at home" orders, only venturing out for necessities and exercise, such as hiking and kayaking, and then only in less popular areas. One of our adventures was a really pretty paddle on the Patapsco River, putting in just above the dam at Daniels and paddling upstream about 1.5 miles before turning around and heading back to the launch sight. 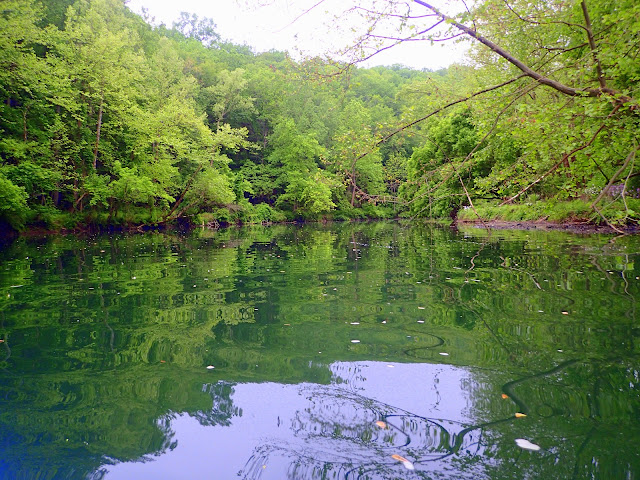 This stretch of the river flows through the aptly named Patapsco Valley State Park, one of Maryland's prettiest, and certainly, its most popular. 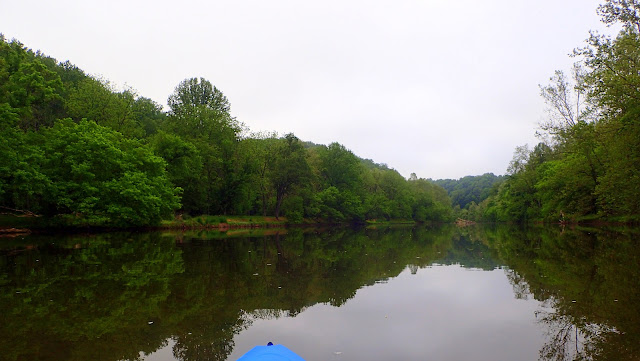 The Patapsco Valley State Park extends along 32 miles of the Patapsco River, encompassing 16,043 acres and eight developed recreational areas. Recreational opportunities include hiking, fishing, camping, canoeing, horseback and mountain bike trails, as well as picnicking for individuals or large groups in the park’s many popular pavilions. The park is known for its trail opportunities and scenery -- the river is why. 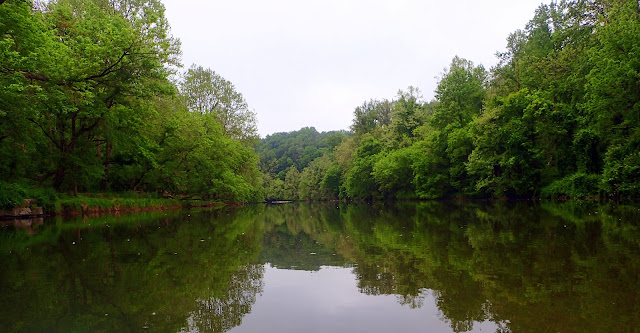 Although we probably only went upriver 1.5 miles before hitting some minor rapids that we didn't feel like paddling against just past a big bend, this is well worth a few hours of your time just to enjoy the river. This stretch of the river flows through the Patapsco Valley State Park (Daniels Area), and trees now line the shores. Other than a bridges and supports from the rail road (the Baltimore & Ohio's Old Main Line, now run by CSX), this stretch offers few signs of civilization. 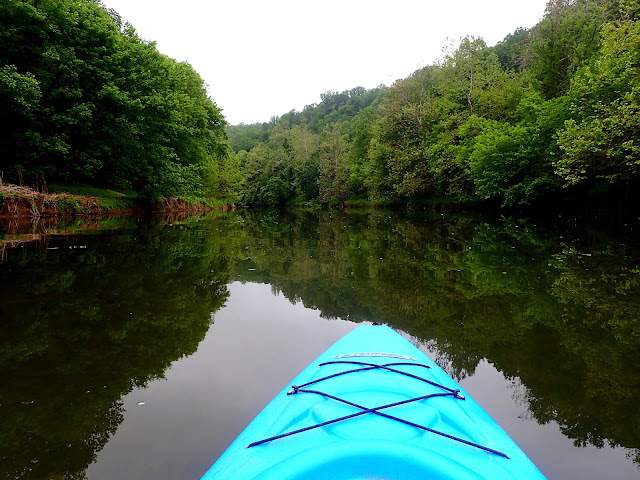 Other than these rapids -- and you can hardly call these even Class 1 rapids -- the river current was pretty gentle, although when we just floated, the current would push us sideways.

Heading back downriver was pleasant, with the current doing most of the work until just above the dam. We paddled only to steer. 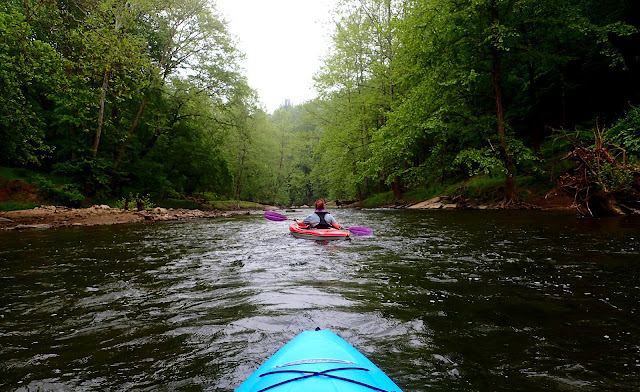 Another option for kayaking on the Patapsco River is launching at Woodstock and heading down stream until taking out at Daniels. That option offers a nice four-hour float with the current down the river. Check to see whether enough water is running on the river, unless you don't mind the occasional portage. I haven't done this kayak trip, but I know folks who have, and I plan on doing so next spring. 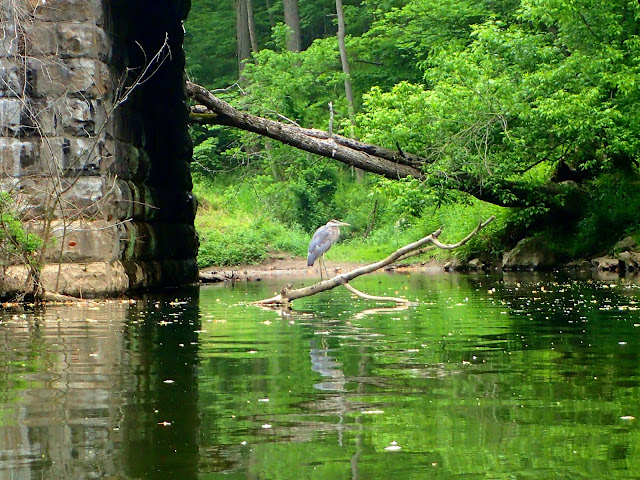 I think you'll be impressed by the beauty of the river. The morning we were there -- not a weekend morning -- we had the river to ourselves, except for a Canada goose, a mother mallard duck and her ducklings and a beautiful heron fishing for his breakfast. He kept a wary eye on us until we were well past him! 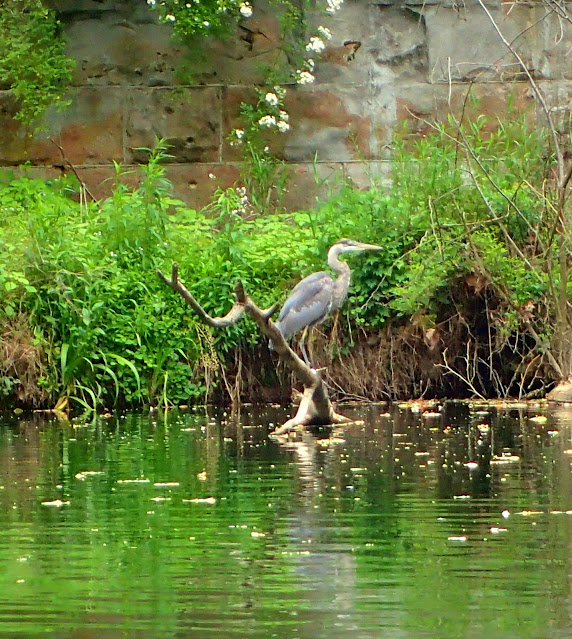 We were startled by how clear the water was, although the river doesn't seem very healthy -- no water grasses were growing in the river and we didn't see any fish and not very many turtles. 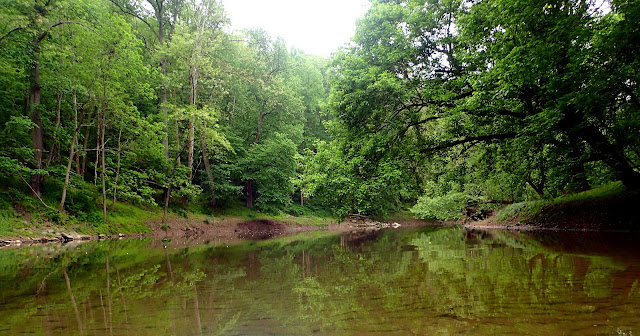 If Daniels sounds familiar, then thank you for being a return reader! MidAtlantic DayTrips has featured the Daniels area before, exploring several trails leading to Maryland's ghost town of Daniels and ruins of the churches in the fall, in the winter, and on the Howard County side above the dam exploring the Old Main Line (America's first rail trail) in the winter and spring, and a pretty loop hike past house ruins. 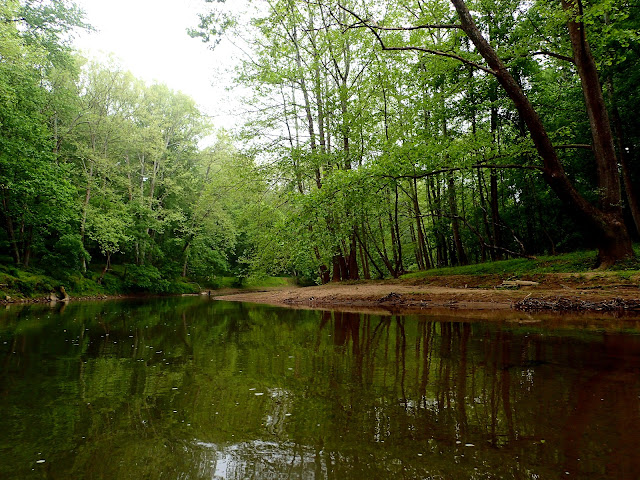 Know before you go: Some parts of the river will be impassable during a drought or low-rain period. Spring is your best option for exploring the Patapsco River by kayak, or after a significant rain.

Know before you go 2: Parking is tight at Daniels -- maybe room for 10 cars unless you wish to chance parking illegally (not recommended, since big trucks can rumble by). Your best bet? Arrive early.

Know before you go 3: Paddling.com is a great resource for finding good kayak routes! 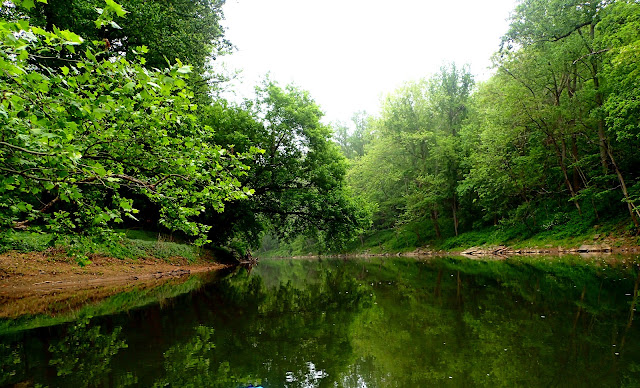 For the Woodstock launch area: North on U.S. 29 to dead end at Route 99/Old Frederick Road; left on Route 99. Drive just over 3 miles and turn right on MD Rt 125/Woodstock Rd, cross the railroad tracks, cross bridge, parking on left for put-in (long portage from parking to the river). 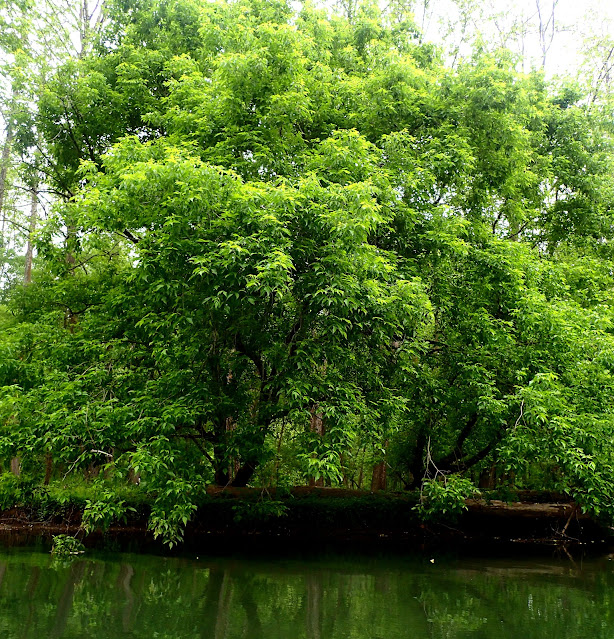 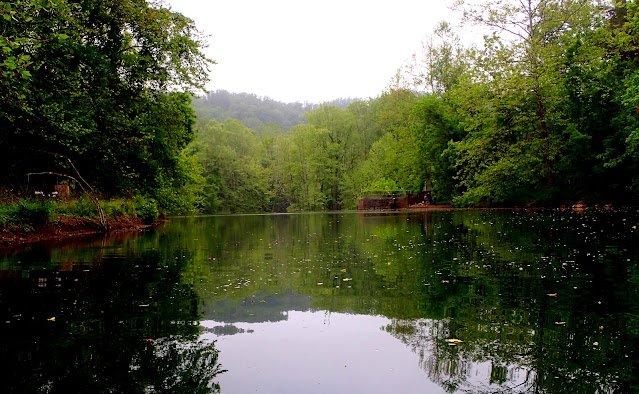