What's Lurking in the Halls of Admiral Fell Inn? 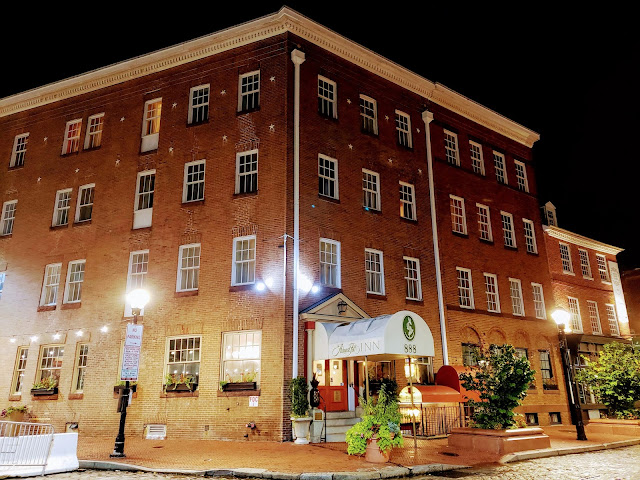 Whether you want to stay at a very haunted boutique inn in a quaint neighborhood in Baltimore, or you're simply interested in joining in a paranormal investigation, such as the well organized and fun events run by professional ghost hunting outfit Ghosts N'at out of Pittsburgh, a stay at the Admiral Fell Inn, in the heart of Fells Point, is for you!

Even if you don't like haunted places, consider staying -- I get the sense these ghosts are pretty polite. 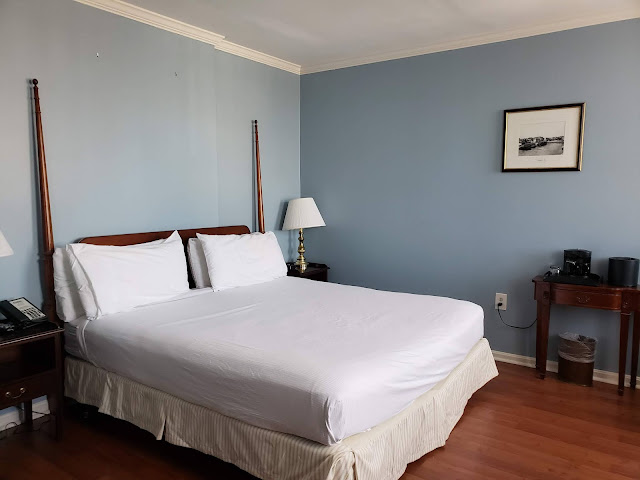 The Admiral Fell Inn is a 80-room hotel created out of seven historic buildings, several of which date back to the 1800s. With an excellent location next to Fells Point Harbor, many of the rooms overlook the square and cobblestone streets, a scene that could come out of almost any old city in Europe. 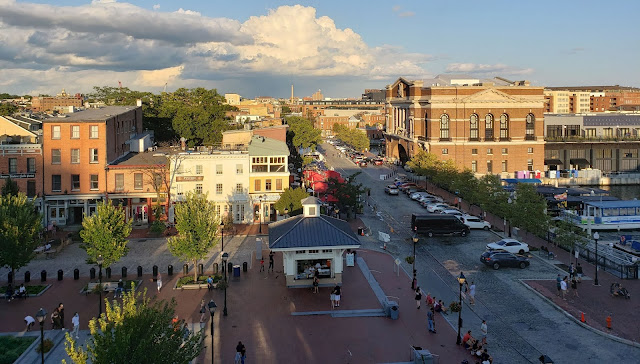 The Admiral Fell Inn is well recognized as a very haunted location. Even Forbes Magazine listed it in its list of top 25 haunted hotels in the United States. (Also worth noting that another Baltimore boutique hotel, Lord Baltimore Hotel, also made the list.)

Why is this historic inn so haunted?

It is the scene of a sensational murder that occurred in room 413 in 1999. Gary Mick, a homophobe and, apparently, also a murderer -- a terrible combination -- stalked Christopher Jones, an out-of-town guest attending a pharamaceutical convention in Baltimore, and bashed his head in with a hammer claw. Mick struck Jones nine times; Mick then walked away. The crime might never have been solved, but Mick soon began hunting another gay man and tried to kill him. This time, Mick was unsuccessful and his victim got away, called the police and provided enough details to identify his assailant. Mick's finger prints were identified at the murder scene in room 413 and he was sentenced to two life sentences and as of the date of this writing, is still being held in a maxiumum security facility in western Maryland.

But before that, at least one of the buildings now comprising the building served as a boarding house, called "The Anchorage," for sailors, from the 1790s to just a few decades ago. Originally run by the Christian Port Mission (alternately known as the Port Mission Women's Auxilary), it was here that a sailor just arrived from distant ports could find a clean(ish) room and safe harbor for a few nights. Church services were held on Sundays for those interested; neighbors often brought the sailors holiday treats.

Eventually, The Anchorage was taken over by the Young Men's Christian Association in the late 1920s and operated into the 1970s, when it became a cider and vinegar bottling plant. Over the almost 200 years it operated, The Anchorage and then the YMCA sheltered tens of thousands of men in its rooms.

Only, some of them never left. With them, they brought their diseases acquired overseas, their hardships and heartaches, and life pain. The Sun (now the Baltimore Sun) reported that one young sailor shot himself on the premises. Others suffered from various causes and passed away, in this last safe anchorage. 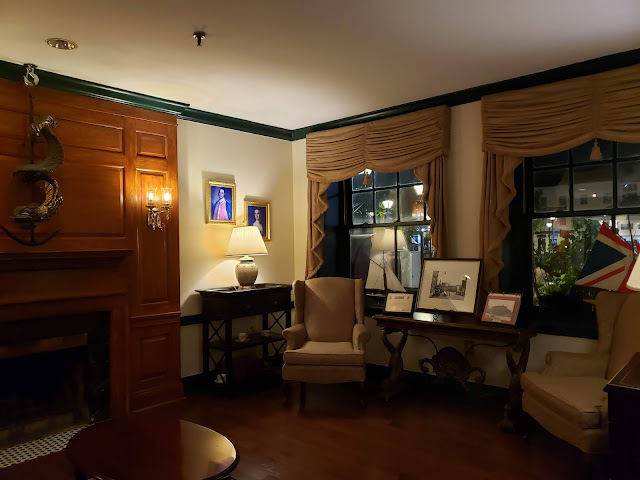 After serving as a bed and breakfast for 11 years, the Admiral Fell Inn became a boutique hotel in 1996, offering comfortable, well-maintained rooms in a tradional decor. You'll find the usual flat-screen TVs and coffeemakers and free wifi. You won't find either a fitness center or pool or even room service, but this is a small, historic property with lots of personality (no two rooms are alike) -- you can go to one of the huge personality-less hotel chains if that's what you're looking for.

And of course, the Admiral Fell Hotel has ghosts. Lots of them! Previous guests have reported tales of floating sailors going up and down the (now removed) fire escape stairs and roaming the halls, invisible entities knocking at doors, and a ghost dog playing in the halls.

Maybe you'll see the old lady who invites herself into your room, and sits on your bed staring at you until you wake up. When you do, she shushes you, and tells you to go back to sleep! (As if that would be possible!) Or perhaps you might be awakened by a rowdy party going on in the room next to yours. Don't bother calling the front desk to complain, because inevitably, the room that's the scene of this party is completely empty, the sounds of evil laughter, glasses clinking, and gunshots echoing through the halls. 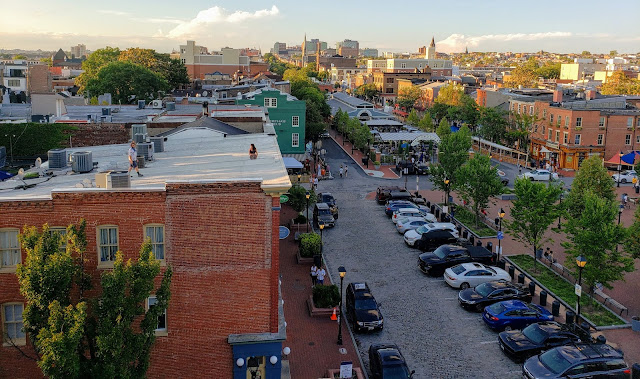 Fells Point's own history lends itself to hauntings and it is believed that some of this history may have contributed to the inn's hauntings. Once a bustling deep water port with an active ship building industry, the conversion to steam ships, which began during the Civil War, soon spelled the demise of the ship building industry in Fells Point. Various factories, including the vinegar bottling plant, replaced the ship building industry, but the neighborhood fell on hard times. By the early 1900s, Fells Point was a violent neighborhood more known for shady bars and speakeasies, illegal gambling halls, and brothels, run by mobsters and shady criminal figures, than for Christian virtue. 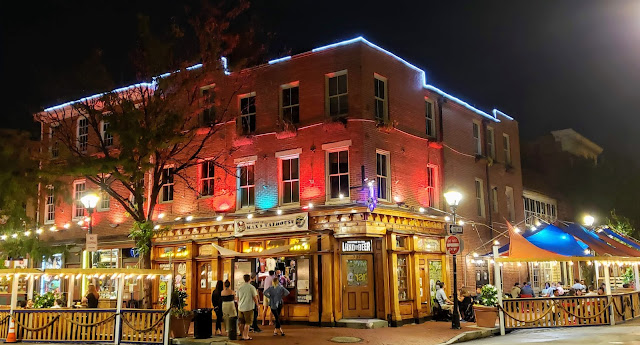 We recently joined Ghosts N'at for what turned out to be a fantastic ghost hunt, that formally ran from 7 to 11:30 p.m. The ghosts did not disappoint! 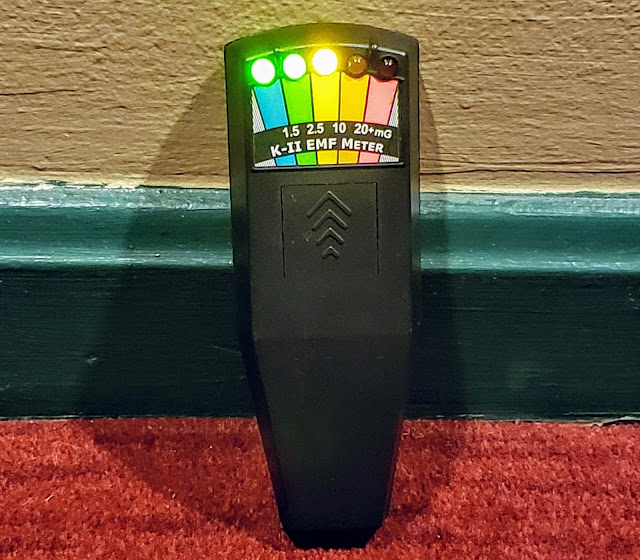 Ghosts N'at runs a well-organized paranormal investigation. The evening started with hotel historian Steven Foote describing the hotel's hauntings. Then the group divided into six groups of eight to ten individuals (wrist bands handed out as we checked in earlier in the afternoon identified our groups) and dispersed to different hotspots around the hotel: the Murder Room (Room 413), the Ballroom, the Stone Room (in the basement), rooms 236 and 238, a hallway on the third floor, and rooms 485 and 487. At each location, a team had already set up various ghost hunting equipment -- movement detectors, EMF readers, voice recorders, flashlights and even cat toys. 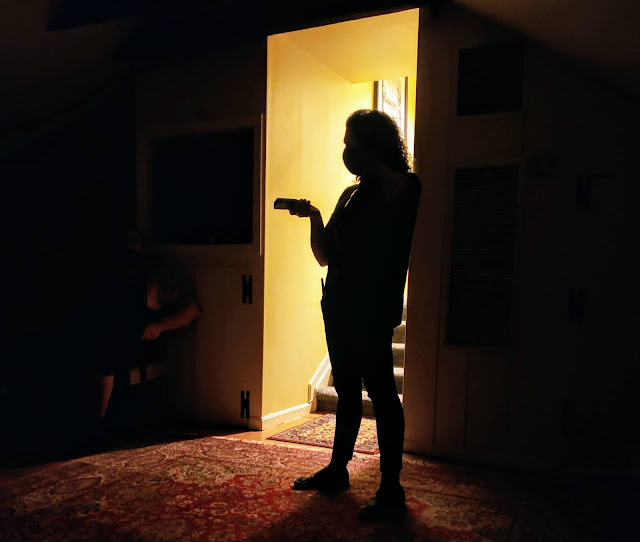 Usually in other articles about paranormal investigations, I have to explain that ghosts are not performing seals and there's a lot of boredom involved. Not this time! Whether the spirit world is extremely active because of the ongoing pandemic or because this was the first organized ghost hunt  onsite, the energies in the inn were frenetic. 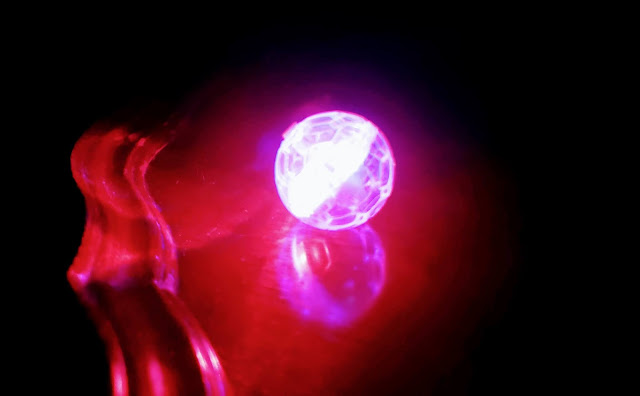 There were a lot of evps: "my whole life" in the Stone Room in the basement, in response to, "Do you like to play cards?" 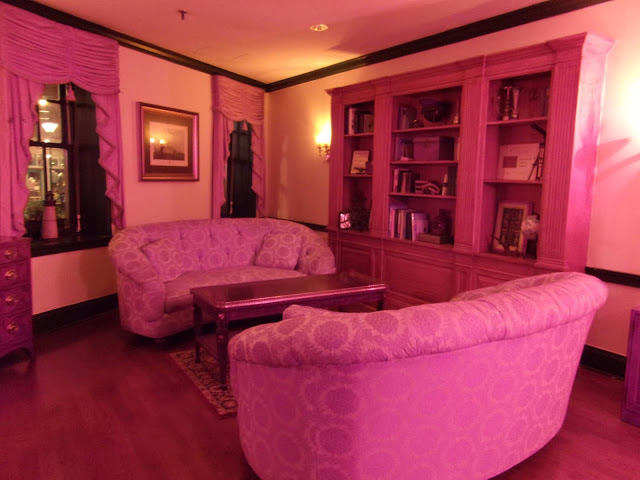 In one of the bedrooms, "My name is Emma" in response to our asking, "Are there any ladies of the night here?" Then a strong but ghostly/creepy male voice offered: "That whore!!"

In the Murder Room, when asked "Is Chris Jones here?" the response was "MURDER!" Then, "head," less emphatically, corresponding to the events documented to have occurred in that space. 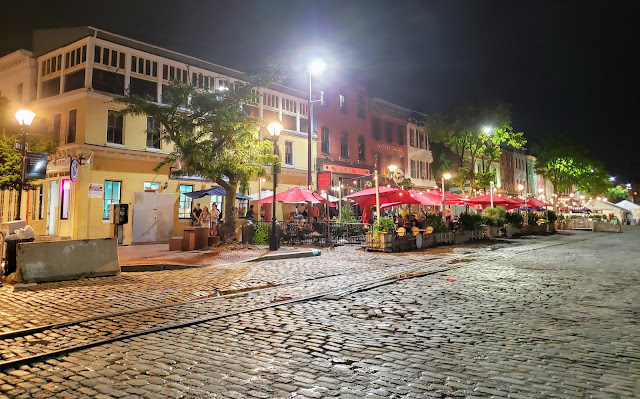 Throughout the evening, flashlights turned off and on, in response to questions and often on cue. The cat balls I brought lit up several times spontaneously (although not in response to a question). Our EMF reader also frequently responded, unprompted but also sometimes in response to a specific question. 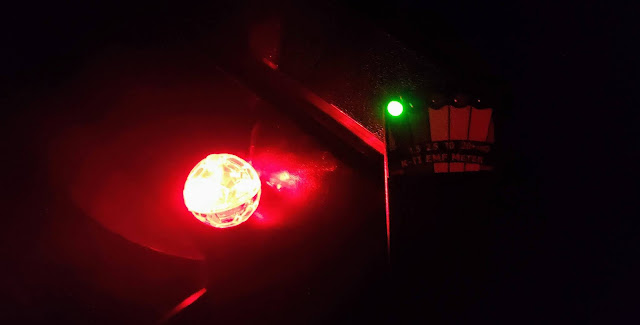 After the formal ghost hunt was over, participants were allowed to continue their own investigations at the various locations or in the hotel's other public spaces (we were the only guests there during this COVID-19 weekend) or in their own rooms through the night. We decided to visit each of the locations, snap some photos and then try to do some EVPs and such in our own room. To both my relief and brief disappointment, we encountered no paranormal activity in our room.

We slept soundly that night -- no old ladies waking us. Not even errant alarm clocks (apparently ghostly hands often set these to go off at odd times). The ghosts were very polite, and let us sleep. We hope they can find peace as well.


Getting there: 888 S Broadway, Baltimore, MD 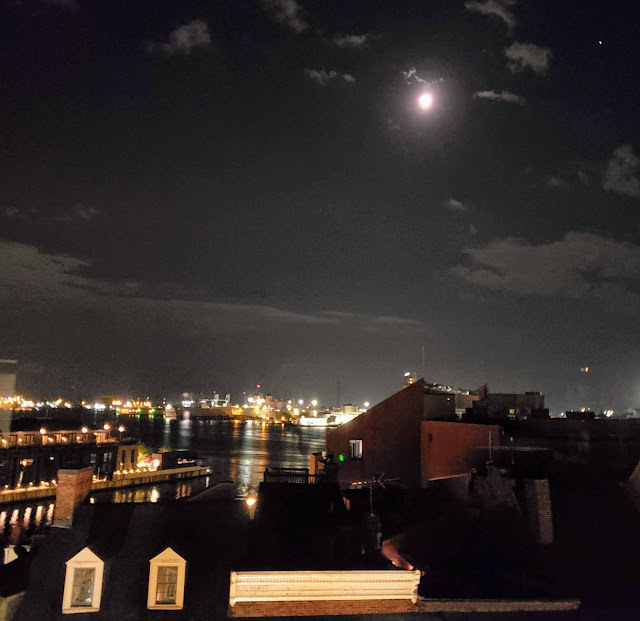 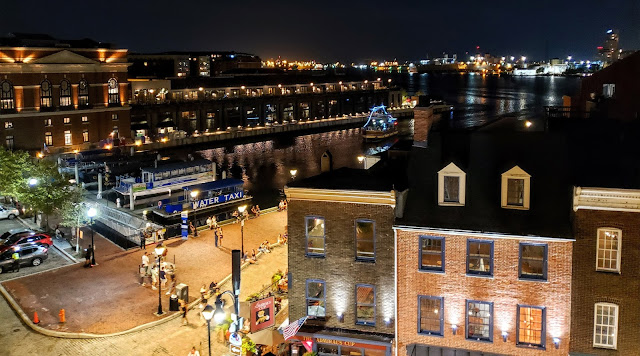 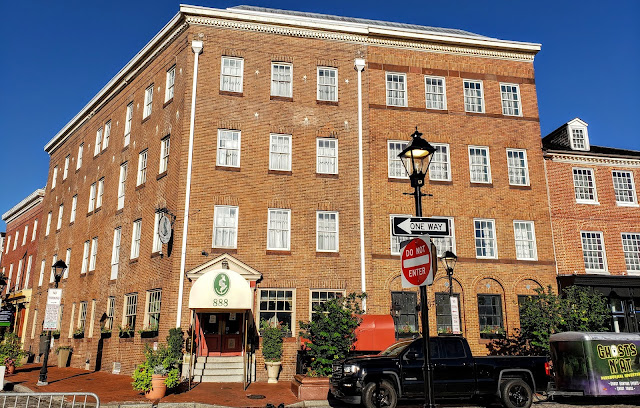