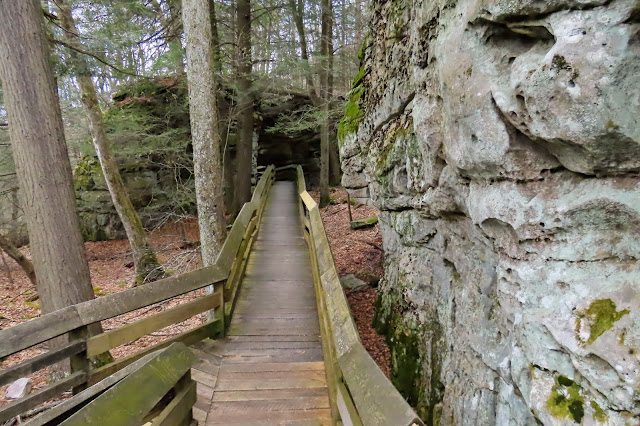 Bear Town State Park is a relatively small state park in West Virginia, on the border of Pocahontas and Greenbrier counties. Its 110 acres encompass a really cool geological rock maze of deep crevices that form alleyways and rooms -- all traversed by a boardwalk that leads you to cool vantage points in, among, and above the huge rock boulders and towering hemlocks. 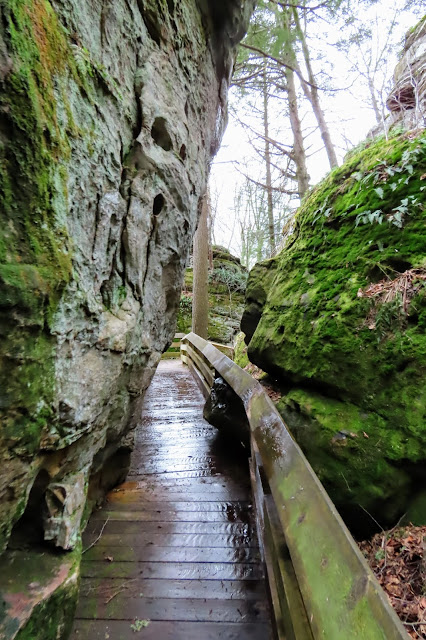 We were staying at a cabin in nearby Watoga State Park and had just arrived -- check in is at 4 p.m. -- and we wanted to do something but weren't up to a full on hike so close to dinner and after having driven for five hours from Baltimore. 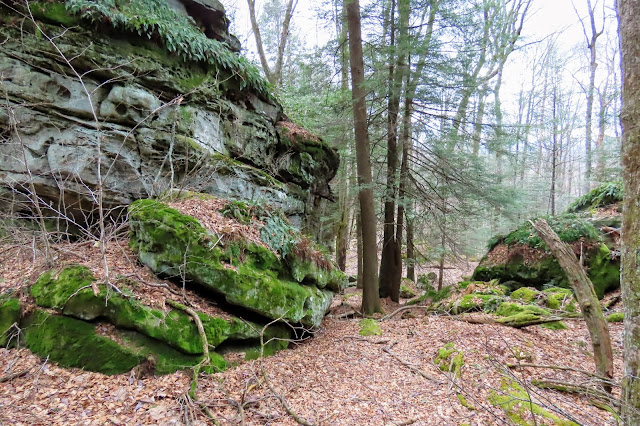 Bear Town State Park was a mere 8 miles away, and we knew from prior research that the single trail would only take an hour or so to fully explore, perfect for after a long car ride from Maryland. We quickly unloaded the car into the cabin and punched in Bear Town State Park. We were on our way! 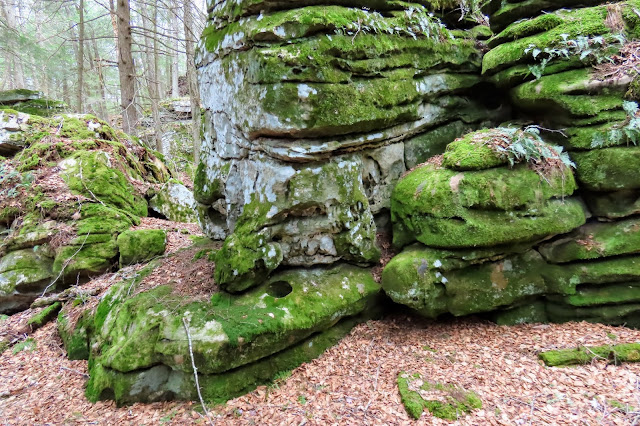 Bear Town didn't disappoint. This is a truly magical place. 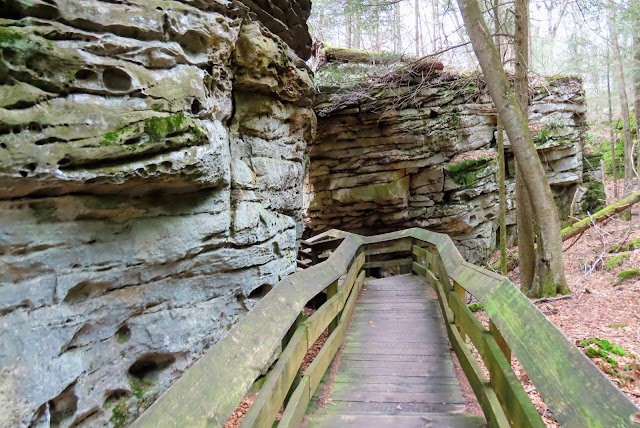 You shouldn't expect a strenuous hike, if you could even call it that -- and this walk through the boulders and hemlocks will appeal to kids of all ages -- it's fun. 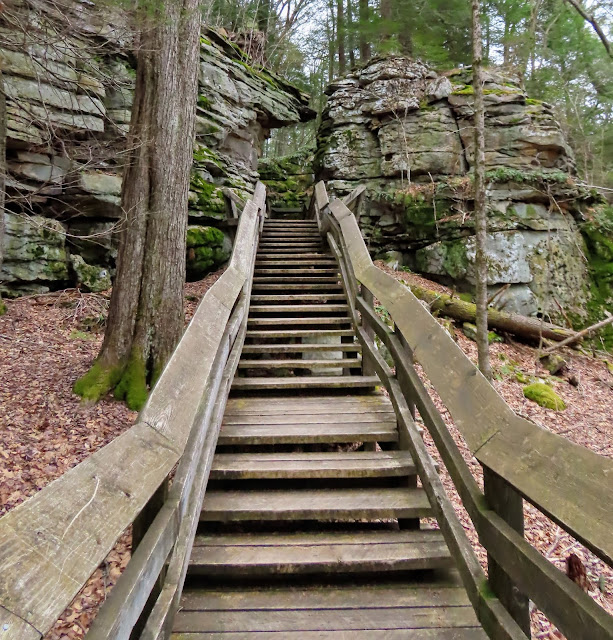 The board walk runs a half mile, and there are multiple stairs up and down and around the crevices and nearly vertical cliffs -- the massive boulders are sometimes 50 to 60 feet high. You are constantly changing elevation as the path leads you through the rock formation, but it's not strenuous, because rarely are there more than 20 steps in a row. 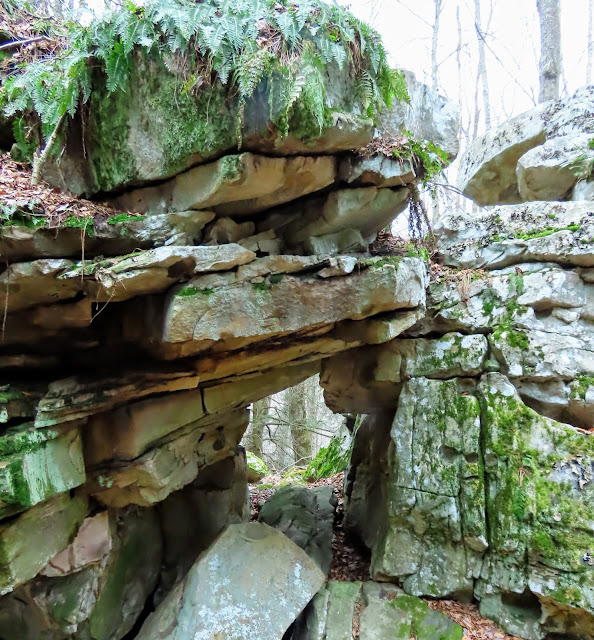 Droop Sandstone, the rock of this formation, breaks up in regular patterns, creating the almost square boulders and rocks. You'll notice the pitted surface of the rock faces, created by the "non-cementation" of the sand grains, which when exposed to wind and rain, simply erodes away. There are minor piles of white sand along the base of the some of the formations. 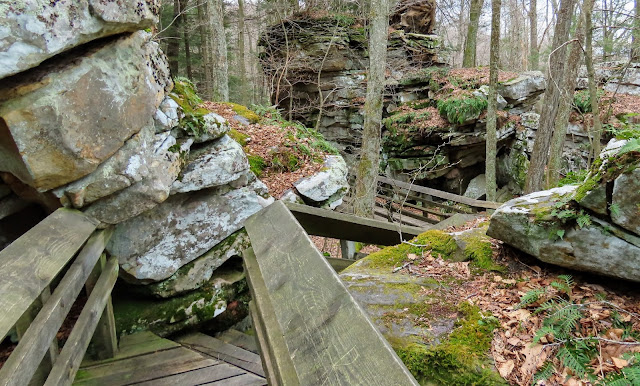 Although there is handicap parking, the boardwalk is only accessible for wheelchairs for a slight bit, leading you to an overlook where you can at least get a slight appreciation of the rock maze. 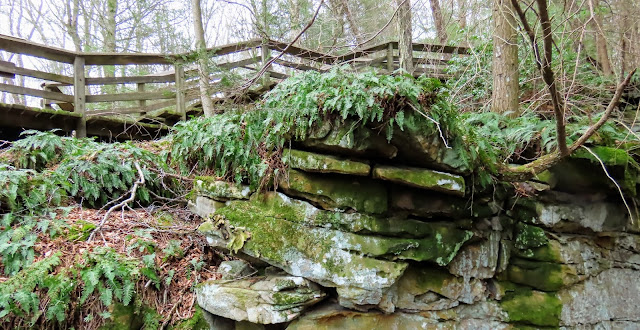 The boulders are all almost entirely covered by rock-cap fern, looking like so many awkward toupees. :) Sometimes the hemlocks and other trees grow on top of the boulders, anchoring themselves by sending their roots through the crevices and further splitting the rocks over time. 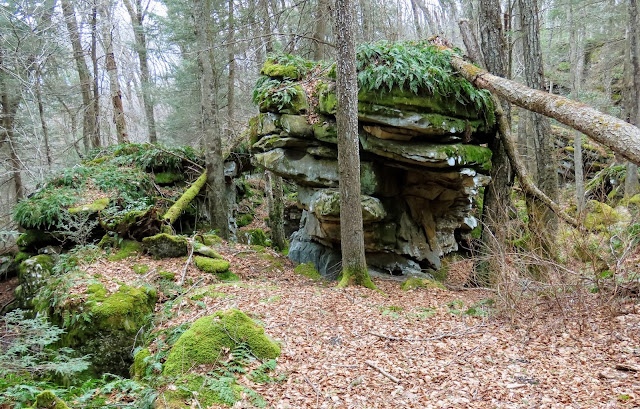 We were there on a late Sunday afternoon and were the only ones in the park, a delightful situation for a travel writer wanting photos without people. At one point we startled a nesting bird -- some sort of raptor, judging from the sound of it and the size of the nest -- causing us to turn around and opt to explore other parts of the boardwalk. 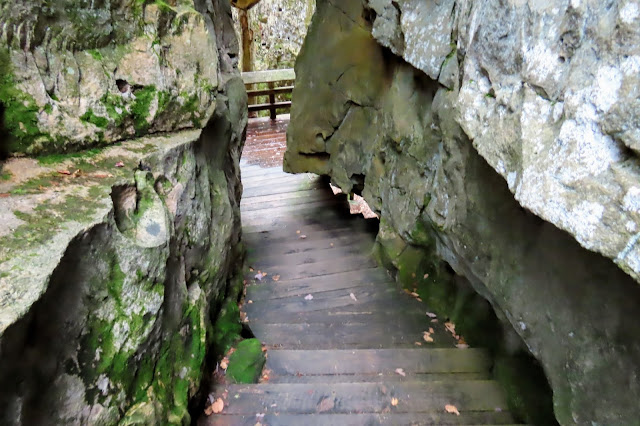 Bear Town State Park seems to be a hidden gem, a well-kept secret that keeps the place from being overrun, like similar such rock formations in Maryland (link to Maryland's rock maze) and Pennsylvania (links to Bilger Rocks and Panther Rocks). 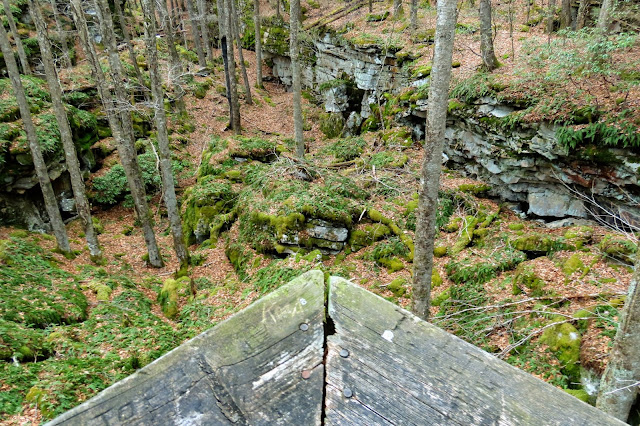 Although there are similar rock formations elsewhere in the Appalachians, Bear Town -- so named because locals once believed bears inhabited the secret places within the rock formation -- is the most extensive and alluring.

Getting there: Beartown Rd, Renick, WV 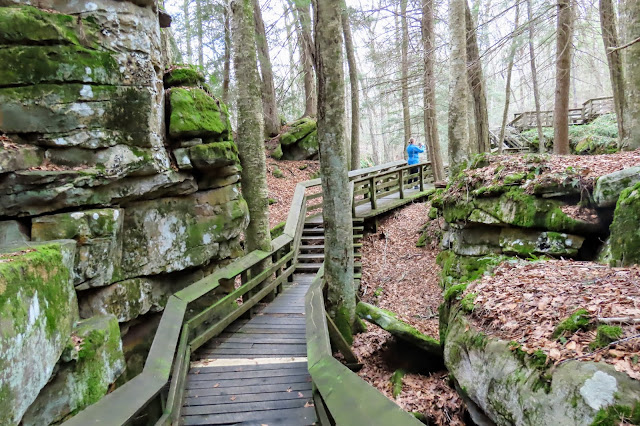 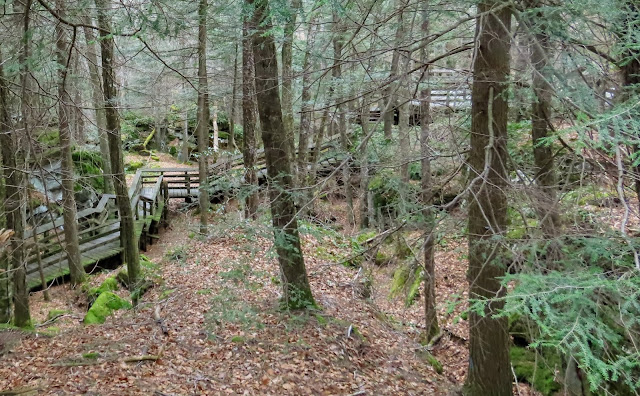