Sojourner Truth, an abolitionist and advocate for rights for women, endured slavery in New York from 1797 to 1828 when she was emancipated based on the law gradually ending slavery in New York. She lived almost her entire life in Ulster County, NY. She was a woman of determination, who pulled herself out of enslavement several months before she would have been legally freed, by walking 11 miles away from where she was being enslaved to the home of Quakers, who were able to protect her.

There's a four mile (plus) walking tour, called the Sojourner Truth Life Walk, which you can find here. We modeled this driving tour on that walk. To be honest, we'd spent the morning hiking, about 5 miles in all. We weren't about to do an 8-mile walk (out and back). But we could do an 8-mile driving tour. So we did. This tour takes you to public art honoring Truth as well as a few important sites in the story of her life. Ironically, the tour will take you about as long to drive as to walk (or at least, that's how long it took me, because we didn't go in the optimal order -- I've written this article and listed the stops below in what I believe are the optimal order -- AND I got out and tried to capture some decent photos for this article).
Because she was born in 1797, two years before the Act For The Gradual Elimination of Slavery, she was to be “slave for life.” The same applied to her parents: James Baumfree, who was kidnapped from the location of modern-day Ghana and Elizabeth Baumfree, also known as Mau-Mau Bet, who was the daughter of individuals kidnapped into slavery from Guinea. (In 1817 New York state had amended the Graduate Emancipation Act to provide that persons who were enslaved before 1799 were not be be “slaves for life” but rather would become free in 1828.)

Her parents named her "Isabella Baumfree." She changed her name to Sojourner Truth after she gained her freedom. After Hardenbergh's death in 1799, his son inherited Truth, James and Betsey, along with up to 12 other enslaved individuals. When he died too, she was about nine years old and was auctioned off to John Neely, a storekeeper who lived in the area; he paid $100 for her and a herd of sheep. Her new enslaver severely beat her because of her inability to understand English -- having been raised in a Dutch Reformed household, she had only learned to speak the language of her first enslavers: Dutch. 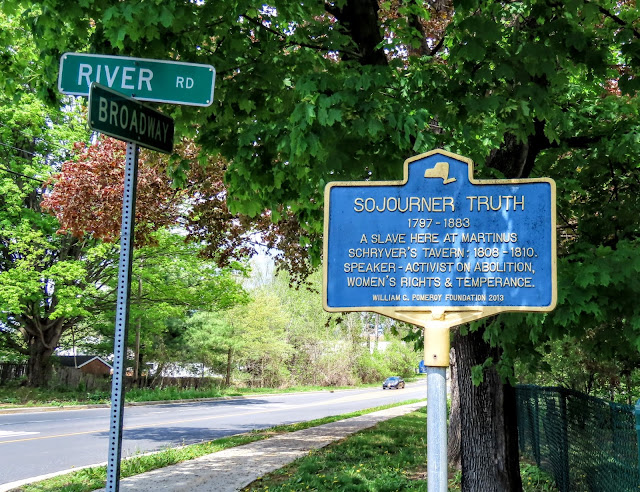 Truth prayed for her father to come and he not only made his way to see her but also helped by arranging her sale to Martinus Schryver, a fisherman and tavern keeper, in what is now Port Ewen. Although Schryver was rude and crude -- Truth later recalled she learned to swear there -- he was decent to her. She had time to watch the white-sailed sloops on the Hudson River and roam about.

This is the first stop on the driving tour: 1 River Road, Ulster Park, NY the tavern where Schryver had enslaved her. 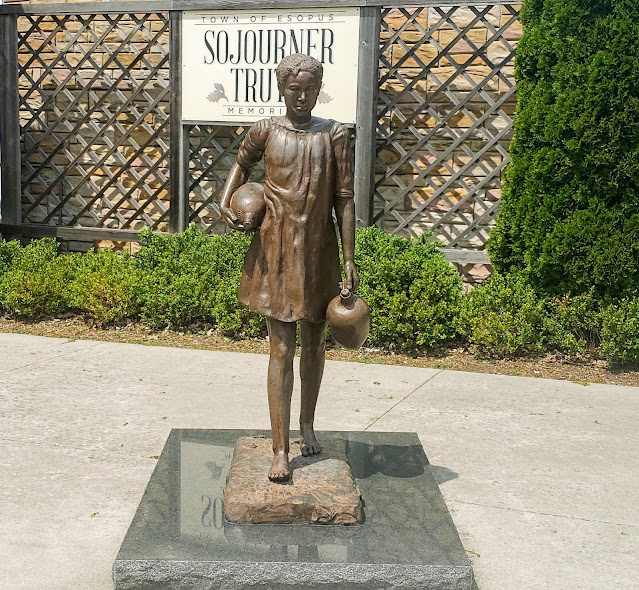 The next stop is 172 Broadway, Port Ewen, NY, just a half mile down the road. When plans to improve New York Route 9W revealed Martinus Schryver's name as owner of a plot at the corner of of Salem Street and 9w (i.e., Broadway) in Port Ewen, community activists lobbied for the site to be dedicated to Truth. The bronze sculpture is by a local artist, Trina Green, depicting Truth as a young girl carrying jugs. Dedication took place in Port Ewen on September 21, 2013.

When Truth was 13, Schryver sold her to John Dumont, who owned a farm on the banks of the Hudson River in what is now the village of Esopus. Truth worked both on the land and in the house. She fell in love with Robert, who was beaten for visiting her, eventually married Tom and bore 3 daughters: Dinah, Elizabeth, and Sophia, and 2 sons--Peter and James, who died in infancy. 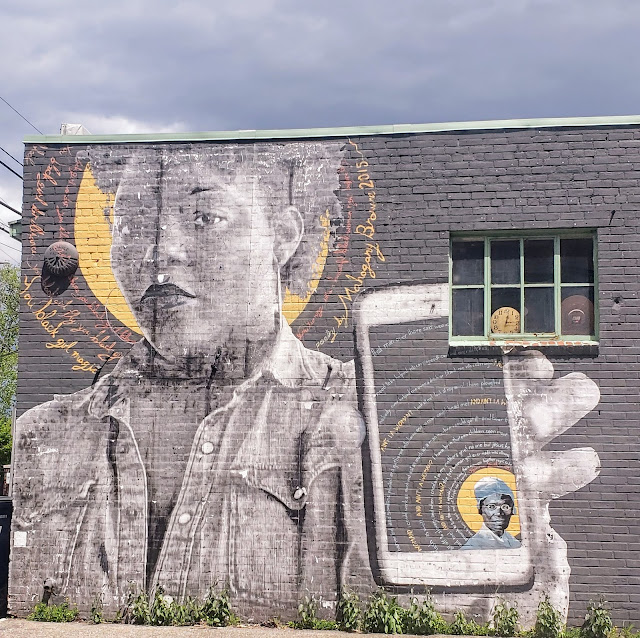 The next stop is the first of two murals, "Ain't I a Woman?" *, by mural artist Chip Thomas and collaborator Jess X Snow, located on the corner of Furnace Street and Franklin Street, Kingston, across from the Kingston Library. Featuring portraits of poets Mahogany Browne and T'ai Freedom Ford with Sojourner Truth's "Ain't I A Woman" text, this mural honors 150 years of the oral tradition of Black women advocating for their own self care and empowerment. 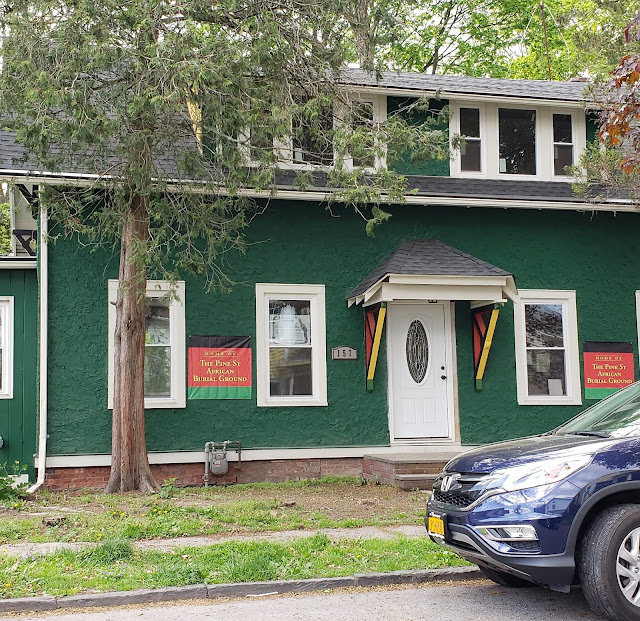 The next stop is the Pine Street African Burial Ground, at 157 Pine Street, Kingston. Although a house was built on top of the site, which probably extends into the adjacent lots, the site is now protected and will serve as a memorial to those who were buried there. This would have been an important site for those enslaved in Kingston, who may have had loved ones interred there.

Truth and her husband were promised freedom on July 4, 1826, one year before all New York adult slaves would be freed, for faithful service. Dumont retracted his promise. After Truth finished the fall work and spun 100 pounds of wool, she decided to escape, even though Tom decided to stay. She took only the infant, Sophia, and a cloth with clothes and provisions, but left the 3 other children. She walked away but she did not go far. She walked from the farm in Esopus to Poppletown, to the home of Levi Rowe, a Quaker, who then sent her on to the Van Wagenens who took her in. Although not Quakers, they did not believe in enslaving other human beings. Later the same day Dumont went to Van Wagenens to claim her. Truth refused to return. The Van Wagenens paid him $20 for Isabella and $5 for Sophia and he left. At the Van Wagenens, she was not enslaved, but rather, treated as a guest. 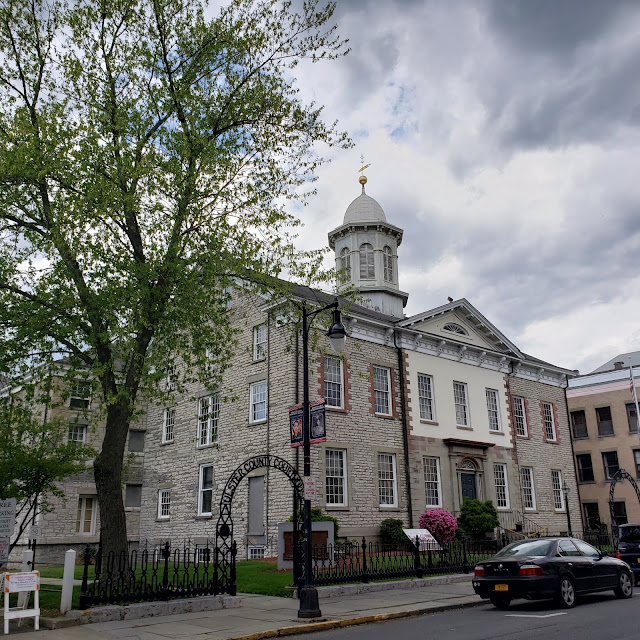 Pictured above is the Ulster County Courthouse, at 285 Wall Street, Kingston a building Truth entered numerous times in 1827 and 1828 while fighting to recover her son, Peter. Early in 1827, he had been sold and sent to Alabama illegally. On July 4, 1827, all adult enslaved individuals in New York State were freed. Children became bonded servants for a period of years, depending upon their ages, but eventually were to be freed. 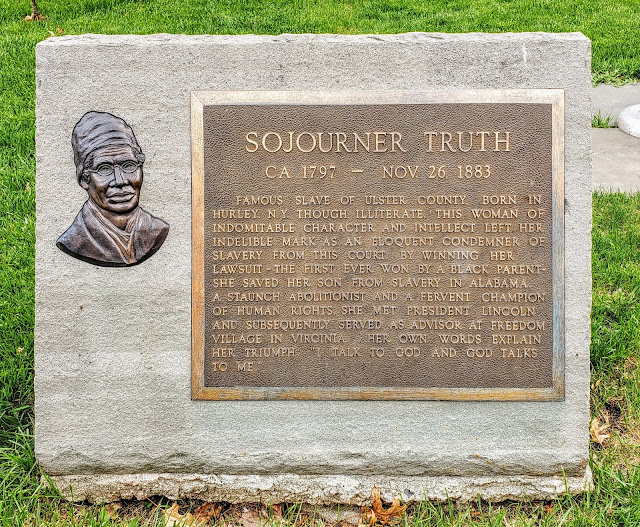 Truth was awarded custody of her son, but Peter had been beaten badly while in Alabama. The commemorative plaque notes that her victory is the first where a black woman triumphed over a white man. 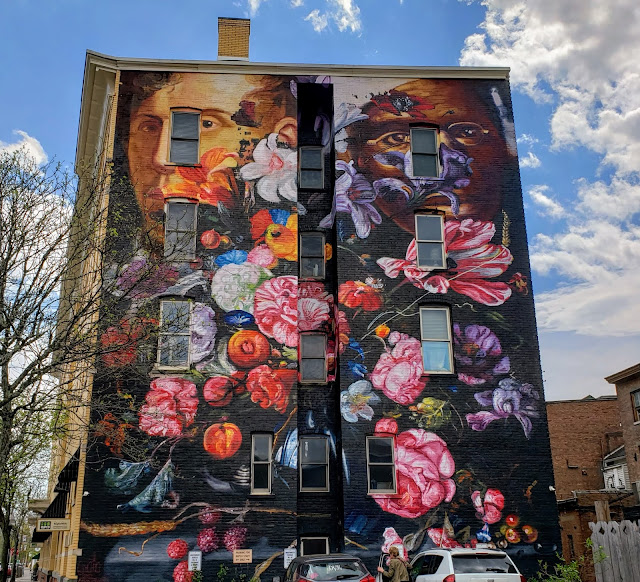 The next stop is another mural at 289 Fair Street, Kingston -- and probably my favorite mural of all I've photographed while writing MidatlanticDayTrips. Pronkstilleven is simply gorgeous. Created by Gaia, this piece depicts portraits of Sojourner Truth and John Vanderlyn (an American neoclassicist painter). In case you're wondering, pronkstilleven is Dutch for "ornate still life." 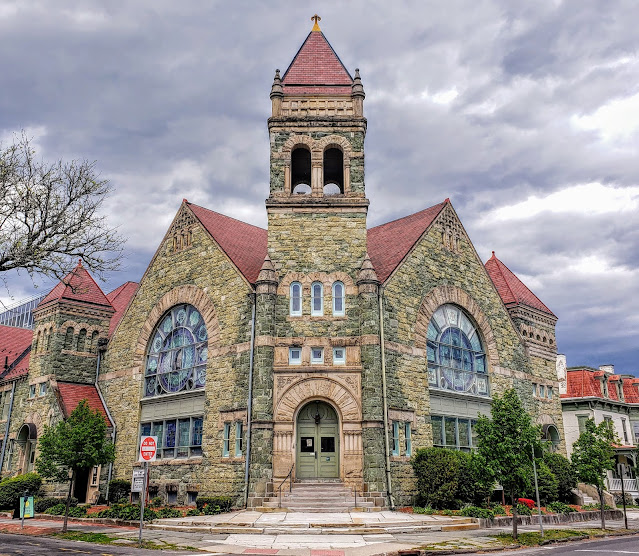 The tour's last stop is at 35 Pearl Street, Kingston, the St James Methodist Church. On March 27, 1993, the fifth annual Symposium on Sojourner Truth was held at the church. This was not the same building of rough hewn timber built in the mid 1820s that she attended, but it is on the same site. She joined it late in that decade, at the time that she was legally freed from slavery and living in Kingston as a domestic servant. 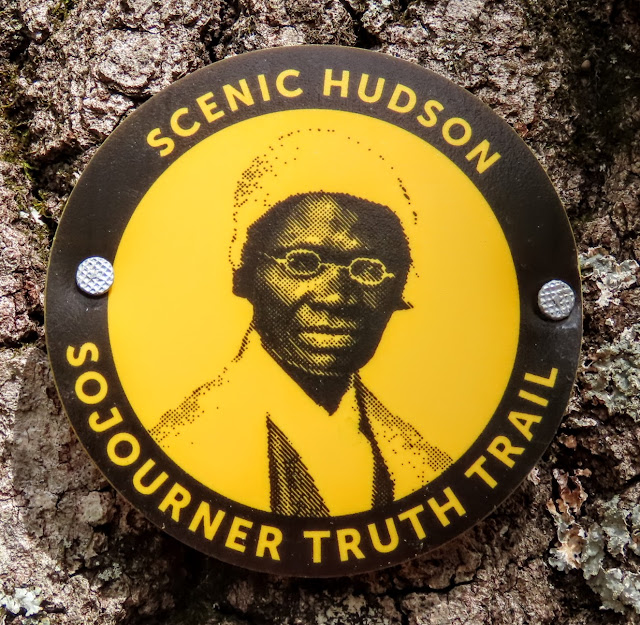 Looking for more Sojourner Truth? Check out the Sojourner Truth Discovery Trail in Shaupeneak Ridge Park, an area she probably walked through on her way from the Dumont farm in Esopus to Levi Rowe's home and the lovely Sojourner Truth statue at the Highland's entrance to the Walkway Over the Hudson State Historic Site.
Getting there: 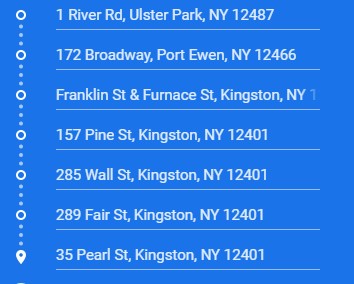 Hours: Dawn through dusk
* The text of Truth's "Ain't I a Woman" speech. For the record, I believe Truth was prescient in her words, and they still hold power, almost 200 years later!
Well children … Well there is so much racket there must be something out of kilter. I think that betwixt the Negroes of the South and the women at the North all talking about rights these white men going to be in a fix pretty soon.

But what’s all this here talking about? That man over there says that women need to be helped into carriages, and lifted over ditches, and to have the best place everywhere. Nobody ever helped me into carriages, or over mud puddles, or gives me any best place. Ain’t I a woman?

Intellect, that’s it honey. Intellect. What’s that got to do with women’s rights and Negroes’ rights? If my cup will hold but a pint, and yours will hold a quart, wouldn’t you be mean not to let me have my little half measure fool?

And then that man back there in the black … That man back in the black says that women can’t have as much rights as men because Christ wasn’t a woman. Where did your Christ come from? Where did your Christ come from? From God and a woman. Man had nothing to do with him. Now if the first woman that God ever made was strong enough to turn this world upside down all alone, these women together ought to be able to turn it back and get it right side up again. And now they is asking to do it and you men better let them.

Obliged to you. Thank you for letting me speak to you this morning. Now old Sojourner ain’t got nothing more to say.
Follow the MidAtlantic DayTrips on Facebook, Instagram, Pinterest, and LinkedIn.
Posted by Jody Arneson at 6:30 AM